One dead in Ahwaz, Iran clash 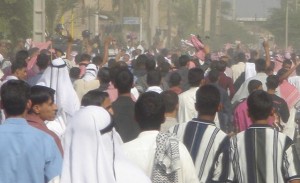 At least one person was killed and dozens were injured in a second day of clashes between Iranian security forces and Arab residents of Ahwaz, a city in the country’s Khuzestan province.

Thirty-year-old Mohammed Maarabi was killed in the violent clashes early on Saturday, witnesses told Al Arabiya. Ahwaz youth residents had declared Friday a “Day of Rage” to demand the rights of the ethnic Arab majority in the Khuzestan province.

Witnesses said dozens of wounded protesters were taken to their homes in fear they could be detained in hospitals.

Ahwaz youth residents had declared Friday a “Day of Rage” to demand the rights of the ethnic Arab majority in the Khuzestan province.

Iranian Minorities’ Human Rights Organization (IMHRO) said in a statement obtained by Al Arabiya that the government has deployed agents in public squares and in the streets. Basij militia forces and revolutionary guards were positioned in various part of the Ahwaz city, IMHRO added.

The organization quoted Jamal Ahmad, a protester, as saying that government forces have killed at least 10 people since Friday.

“We came out peacefully and they soon started to shoot at us. I saw people falling down next to me,” Mr. Ahmad said.

The demonstration, which was organized via the social networking Websites Facebook and Twitter spread to cities of Hamidieh, Mahshahr, Shdegan, Abadan, and Khoramshahr, according to the organization.

Ahwazi Centre for Human Rights Defense has called upon the international community to interfere and put an end to what it termed “massacres in Ahwaz.” The group demanded in a statement that Iranian government ensures the “safe” treatment in hospitals of the wounded protesters.

The group also said that authorities have intermittently cut off electricity and water from residents of Ahwaz city.

Ahwazi Centre for Human Rights Defense has called upon the international community to interfere and put an end to what it termed “massacres in Ahwaz.”

Iranian securities have launched an arrest campaign in the province against those suspected of mobilizing people for the protests.

The “Day of Rage” was called by opposition movements to mark the anniversary of what was termed the “April 15 Apprising” of 2005.

The uprising was prompted by a leaked secret government strategy to try to change the demographic chart of Ahwaz and make ethnic Arab residents a minority.

Currently there are no official figures on the percentage of Arabs and Persians in the Khuzestan province, but it is widely known that Arabs constitute the majority. Iran’s population is 78 million.

Ahwaz holds 15 percent of the world’s proven oil reserves and has the second gas reserve in the world. Ahwazi Arabs are banned from using media, any political and cultural activities heavily suppressed by Iranian government.

Iranian security services, the Vezarat Atelat, secretly killed many Ahwazi activist and intimidated families of activist who live in exile.