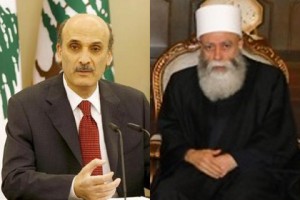 In a letter addressed to Geagea Sheikh al Akl Hassan congratulated him on his safety.

Ten days ago the Lebanese Forces leader miraculously miraculously survived an assassination attempt when he was shot at by “snipers” as he was walking with bodyguards outside his residence in Maarab. The bullets reportedly left holes in the wall of his house.

Geagea told al Arabiya last week the attack was the work of a very professional organization and not the work of individuals , but did not name the organization adding , “according to preliminary investigations at least six people are estimated to have taken part in the attack”.

Geagea said the rival camp ( Hezbollah -led March 8 ) and its regional backers ( Iran and Syria) “has an interest” in eliminating him from the political scene adding that his “attempt to put the Christians at the heart of the Arab Spring ( specially in Syria) is an additional factor in the assassination attempt” he survived last week.