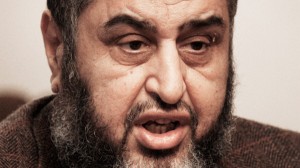 The Muslim Brotherhood said Sunday that it will fight the banning of its candidate for president that has thrown Egypt’s move toward elected civilian rule into disarray and threatens a return to massive street protests.

“We do not accept it. We will challenge it,” said Gehad El-Haddad, a member of the steering committee for the Renaissance Project, which is at the heart of the Muslim Brotherhood’s presidential campaign.

The decision comes at the tail end of a week marred by a slew of shocks and shifts — from a candidate jumble to a march on Tahrir Square— that persisted in shaking the pre-election period.

“There is a continuously increasing state of confusion,” Egyptian writer and blogger Bassem Sabry said.

Among the 10 deemed ineligible to run, three were front-runners in the race for Egypt’s presidency.

They are former head of intelligence Omar Suleiman, Muslim Brotherhood nominee Khairat al-Shater and Hazem Salah Abu Ismail, a lawyer who supports an Islamic state such as Iran’s. All three are appealing the decisions.

The Brotherhood’s lawyer, Abdel-Moneim Abdel-Maksoud, said Sunday that the exclusion does not comply with applicable laws. Shater was disqualified because of a previous criminal conviction. The group is continuing with Shater’s campaign until the election judge issues a final verdict.

“At the moment, our position is that this is the continuation of the policies of (ousted president Hosni) Mubarak,” Haddad said, adding that his organization believes the decision is primarily targeted at Shater and Abu Ismail who are “strong Islamic candidates.”

Abu Ismail, who has seen a surge of support, has denounced American influence and demanded an end to Egypt’s peace treaty with Israel.

He was barred from the race because his mother is a U.S. citizen. (Egyptians holding foreign passports or born to foreign parents are disqualified.) He has sued, demanding proof of the claim from the Interior Ministry.

“I’m guessing the Abu Ismail supporters are going to respond in a very exaggerated manner,” Sabry said about the candidate’s backers, known here as Hazemoon. “I think it will be manageable if Suleiman stays out of the race, … but if he is the only one allowed back in, then it will spark extreme national unrest.”

Anticipating the possibility that Shater might be disqualified, the Muslim Brotherhood dashed last week to field the head of the Brotherhood’s Freedom and Justice Party, Mohammed Morsi, as a backup to Shater.

“This step of the Brotherhood to have two presidential candidates, one as the main one and one as a backup or substitute, reflects the huge (level of) mistrust,” said Khalil al-Anani, a specialist on Egyptian politics and Middle East affairs at Durham University.

Displaying their strength, tens of thousands of Brotherhood and Abu Ismail supporters converged on Tahrir Square on Friday, waving green flags and wearing festive hats for the color of the Muslim Brotherhood as they voiced the need to “protect the revolution.”

“I suspect the election will be rigged,” said Iman al Badry, who wore a picture of Abu Ismail hanging around his neck.

Al Badry gathered with tens of thousands to demonstrate against former regime figures who re-emerged on the political scene, including Suleiman and Ahmed Shafiq, who was prime minister during the last days of Mubarak.

Suleiman is the former longtime intelligence chief who served for 18 years under Mubarak and became vice president shortly before Mubarak was ousted in February 2011 after massive demonstrations.

Some consider Suleiman the military’s candidate put forth by the Supreme Council of the Armed Forces, which has run Egypt since Mubarak’s departure. Suleiman denied the claim in a recent interview with Reuters, but he did say he entered the race to deny the Muslim Brotherhood control of the country.

The Brotherhood’s Freedom and Justice Party captured the most seats of any party in recent elections to the parliament.

Revolutionaries and Islamists consider Suleiman one of the leaders of a system of ills that became a primary factor igniting the nation’s rebellion.

“Part of the reason the people revolted to begin with was grave human rights abuses of the past regime, which included Omar Suleiman,” said Shahira Abu Leil of the activist organization No Military Trials for Civilians. “The language being used is still that of an authoritarian fist.”

Suleiman was thrown off the ballot because he did not collect supporters’ signatures from 15 different governorates as the law demands, according to Egypt’s presidential election commission.

“We have a strong understanding that Suleiman came to the scene just (so he could) be removed with Shater and Abu Ismail to afford the decision a higher level of legitimacy,” Haddad said.