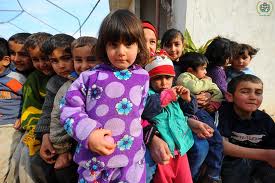 “The delegation visited wounded Syrian refugees in the city’s hospitals and then supervised the distribution of food to more than 170 Syrian families in Tripoli’s Qobba area,” NNA said.

The report added that food was also distributed by the Foundation in Donniyeh’s town of Assoun.

As Syrians have poured across the border fleeing an escalating conflict in their country, a coalition of about 30 Islamic charities with millions of dollars from Gulf funding have banded together to become an indispensable provider for thousands of refugees as well as one of the most outspoken advocates to improve their situation.

UNHCR, the official aid body in the country, has a larger budget and has helped thousands of people fleeing the violence, but reportedly it is also hampered by strict operating rules from the Lebanese government. The UNHCR has constantly been working to expand their access to refugees.

The Islamic charities have been in place in the country for decades, and were particularly involved in aid work during the 2006 war with Israel. Responding to the latest crisis just meant reactivating those networks.

According to their survey there are actually around 16,400 refugees in the north of the country, around 7,000 in the Bekaa and several more thousand around Beirut and Sidon, where they are conducting operations – about 27,000 in total. “These are accurate statistics; we don’t exaggerate any of these figures. Our aim is to be good representatives for the people’s money we receive,” says Lokman Khoder, one of the leaders in the coalition.

Lebanon’s political scene is split between supporters of Syrian President Bashar al-Assad’s regime, led by Hezbollah, and the pro-Western March 14 camp. The government of PM Nagib Mikati is dominated by Hezbollah

At least a million people have been displaced inside Syria during a 13-month crackdown on dissent, United Nations chief Ban Ki-moon said Saturday.

“We are very much concerned that at least one million people have been displaced inside Syria and there are still many Syrian refugees in neighboring countries,” said the secretary general in comments issued by the U.N. following his meeting with peace envoy Kofi Annan in Geneva.