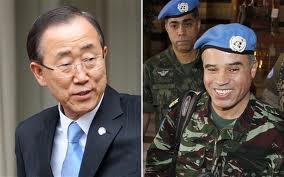 Security forces are locked in fierce battles with opposition fighters in one Syria city and have been shelling another, activists say.

Monday’s reports came as a handful of UN monitors entrusted with overseeing a ceasefire were due to begin work.

President Bashar al-Assad’s forces killed two civilians in the central city of Hama, and were fighting rebels in Idlib in the northwest, while also shelling the flashpoint city of Homs, the Syrian Observatory for Human Rights (SOHR), an opposition network, said.

At least 41 people, mostly civilians, have been reported killed by activists in violence since the UN-backed ceasefire came into effect on Thursday morning, prompting Ban Ki-moon, the UN secretary-general, to urge Syria to ensure the ceasefire does not collapse.

An advance team of five international observers arrived in Damascus late on Sunday, the UN said.

The head of the team, Colonel Ahmad Himmiche from Morocco, said he was optimistic the mission would succeed.

“We will start our mission as soon as possible and we hope it will be a success,” he told the Associated Press news agency as he left a Damascus hotel along with the observers on Monday morning.

Annan’s spokesperson said the monitors’ team met Syrian foreign ministry officials on Monday to discuss ground rules, including what freedom of movement they would have.

The delegation, the first of 30 monitors the UN Security Council approved on Saturday, will set up a headquarters and prepare routines so the mission can verify a cessation of hostilities is holding.

Ban has urged the Syrian government to grant the UN observers full freedom of movement to monitor the ceasefire.

Syrian authorities have said they cannot guarantee the safety of the observers and that they would have to be informed of all movements of UN teams to assure their safety.

The next 25 would come from missions around the Middle East and Africa “so we can move people quickly and they are experienced in the region,” he told the AFP news agency.

Kofi Annan, the international peace envoy who negotiated the ceasefire, wants more than 200 observers to be deployed in Syria.

But the Security Council has said there would only be a full mission if the violence came to a halt.

Syria’s SANA state news agency said Syria “welcomed” the observer mission, and hoped the monitors would see for themselves the “crimes” committed by “armed terrorist groups”.

The Security Council has demanded full freedom of movement for the UN team, but critics of Syria say the government could obstruct its work.

The emir of Qatar, Sheikh Hamad bin Khalifa Al Thani, speaking in Rome on Monday, criticised the peace plan and the UN mission to Syria, saying both had slim chances of succeeding.

He said arming the opposition was a better option.

The failure of an Arab League observer mission earlier this year was blamed in part on government restrictions imposed on the observers, including having to travel with government minders.

On the ground in Syria, there appeared to be no let-up in the violence. Tarek Badrakhan, an activist from the battered and almost deserted Homs district of al-Khalidiya, said the government had resumed its intense bombardment of the neighbourhood early on Monday for the third consecutive day.

“The shelling hasn’t stopped for one minute since this morning. There are buildings on fire right now,” he said via Skype.

Badrakhan and other activists said the army appeared to be on a push to take control of the last opposition-held districts in Homs, and was pounding al-Khaldiya from three sides.

He said half of the nearby district of al-Bayada fell under the army’s control on Sunday night. Troops were trying to storm al-Qarabis and Jurat al-Shayah but the rebel Free Syria Army (FSA) was repelling them, he said, referring to the group of armed opposition fighters and defectors from the Syrian army.

“We hope that the observers would come to Homs as soon as possible because if things go on like this, there won’t be anything left called Homs,” Badrakhan said.

Both the Local Co-ordination Committees, an activists’ network, and the SOHR confirmed the intense shelling of Homs and the two deaths in the city of Hama on Monday.

“I have never seen a government that sends armoured vehicles to deal with armed gangs,” Louay Safi, a member of the Syrian National Council, told Al Jazeera.

“I think the only thing at this point that will end [this violence] is to inject some sort of threat, or to change the balance of power on the ground.”

While Syrian forces have mostly halted shelling of rebel-held neighbourhoods, with the exception of Homs they have ignored calls to pull troops out of urban centres.

Photo: The head of the UN monitoring team, Colonel Ahmad Himmiche from Morocco and Ban Ki-moon, the UN secretary-general