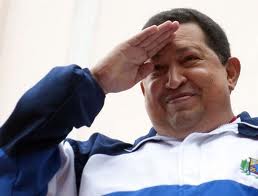 Venezuelan President Hugo Chavez skipped the Summit of the Americas for medical reasons Saturday and headed to Cuba to continue with cancer treatment that is increasingly forcing him out of the international spotlight.

Venezuelan Foreign Minister Nicolas Maduro announced the decision from Colombia, where he was attending the summit in Chavez’s place. He told state television that Chavez decided not to attend on the advice of his doctors.

The decision headed off a potential face-to-face confrontation with President Barack Obama, and also raised questions anew about the effects that Chavez’s cancer could have on his political future and his international ambitions.

Chavez has often used such regional summits as a platform to amplify his criticisms of U.S. influence and press for his vision of Latin American integration. At the 2009 Summit of the Americas in Trinidad and Tobago, Chavez took center stage when he shook Obama’s hand and gave him a book that he encouraged him to read: “Open Veins of Latin America: Five Centuries of the Pillage of a Continent,” by Uruguayan writer Eduardo Galeano.

“Chavez’s decision not to attend the Cartagena summit will only fuel speculation that he is seriously ill. It would have suited him politically to attend. The Colombians wanted him to be there, as did others,” said Michael Shifter, president of the Inter-American Dialogue think tank in Washington. “For more than a dozen years he has been at the center of attention at these hemispheric gatherings. His cancer, coupled with political problems at home, constrains his regional and global role.”

Maduro said the president is in the midst of a “careful, disciplined treatment.”

Chavez appeared briefly on television Saturday night as he waved goodbye to aides at Caracas’ international airport and climbed the stairs of the presidential jet, heading to Havana for another round of radiation treatment. He didn’t make any comments, but a message on his Twitter account said: “Here we go, to continue doing battle! And to continue overcoming! … We will live and we will win!”

Chavez, who is running for re-election in October, told a crowd of supporters on Friday that the radiation therapy has affected his strength but said, “I’m doing well.”

Chavez began radiation treatment in Cuba in late March after undergoing an operation in February that removed a second tumor from his pelvic region. The first was taken out last June. He has kept secret some details of his illness, including the type of cancer and the precise location of the tumors.

Chavez said on Friday that his stay in Cuba will be longer this time.

“Since we’re going to enter the second and last phase of treatment, and that treatment is rough … I’m thinking of asking for permission not to return in the middle of the week next week, but rather stay in Cuba all of this next week to receive the complete treatment and not have to be going and coming,” he said.

The National Assembly held a session Saturday to grant approval for the trip. Venezuela’s constitution requires the president to obtain approval from lawmakers when leaving the country for more than five days.

Doctors say common side effects of radiation therapy include fatigue and damage to areas exposed to the radiation beams, as well as nausea and diarrhea in cases such as Chavez’s in which the pelvic area is treated.

“His physical condition isn’t allowing him to do the things he used to do,” said Jose Vicente Carrasquero, a political science professor at Venezuela’s Simon Bolivar University.

He said the illness is clearly limiting Chavez’s international role because in the past, “if there’s something the president has tried to do, it’s projecting his international image.”

Since having a baseball-size tumor removed in the initial June surgery in Cuba, Chavez has usually sought to appear active and in charge even while coping with his treatment. In December, when his head was still shaved to a fine stubble after chemotherapy, Chavez hosted a summit in Caracas where Latin American and Caribbean leaders formed a new bloc including every nation in the Western Hemisphere except the U.S. and Canada.

Carrasquero said Chavez’s absence from this weekend’s summit raises questions about whether he’ll be able to make it through the presidential campaign.

“What we’re watching for is when Chavez is going to announce that he’s not going to run,” Carrasquero said.

Chavez’s political allies, however, insist that Chavez remains their candidate and that there is no backup plan for the Oct. 7 election, when the president is seeking another six-year term.

Opposition lawmaker Edgar Zambrano said Chavez’s decision to return to Cuba is a “humanitarian issue,” and the president’s opponents joined pro-Chavez lawmakers in granting permission for the trip.

Zambrano also said, however, that even after months of cancer treatment, knowing “the magnitude of the president’s illness still hasn’t been possible for anyone.”

“What would be logical is for the state of health of the president to be widely known. That’s what happens with any president or head of state in other countries,” Zambrano said.

Some Venezuelans in both political camps said the announcement that Chavez wouldn’t attend the summit raised new doubts about his health.

“I want to believe him, but the president has already said he’s well, and later that he isn’t,” said Ricardo Pena, a Chavez supporter who was selling vegetables from a truck on the street. “I hope he returns safe and sound. We need him.”

Cristina Flores, a clothing store owner who opposes Chavez, said she doesn’t believe what he says publicly about his illness.

“He shouts as always, but always from far away on television. I think Chavez didn’t want them to see him weak, sick from close up,” she said.