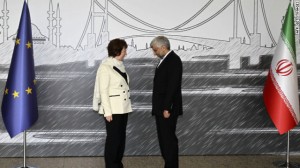 Istanbul- The atmosphere at the opening session of Saturday’s nuclear talks between six world powers and Iran was “completely different” from that of previous meetings, a diplomat said, describing it as “a good morning”.

The diplomat, who spoke during the lunch break about the first meeting between Iran and the world powers in 15 months, said Iranian nuclear negotiator Saeed Jalili had not stated the kind of preconditions that he had done in the last meeting in early 2011, when the two sides failed to agree even an agenda.

“He seems to have come with an objective to get into a process which is a serious process, which is about what we want to talk about,” said the envoy, who spoke on condition of anonymity. “I would say it has been a useful morning’s work.”

and that this could pave the way for a second meeting.

Western diplomats and officials had said in the run-up to the meeting in Istanbul that they hoped for enough progress to be able to schedule a new round of negotiations, perhaps in Baghdad next month.

But, the diplomat cautioned: “We could go backwards this afternoon.” He said he did not expect serious negotiations to take place already during Saturday’s talks, for example on the West’s demand that Tehran cease higher-grade uranium enrichment.

But the diplomat added that Iran had indicated “openness on all those issues”, in contrast to the last time when Iran refused to talk about its nuclear program, which it says is peaceful but the West suspects has military links.

“Not only are the atmospherics and the atmosphere completely different from what they were previously but more importantly he (Jalili) is not coming with the same preconditions and what we would consider obstacles that we saw previously,” the diplomat said.

He said Jalili’s tone in his opening statement was “calm and constructive”, even though there had been elements of “defiance and disagreement” in a second intervention during the talks with the six powers – the United States, Russia, China, France, Britain and Germany – and their main representative, European Union foreign policy chief Catherine Ashton.