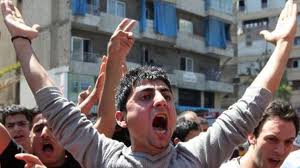 All over Syria, protesters took to the streets Friday to test the day-old cease-fire there. While there were no major attacks, Bashar al-Assad’s tanks and snipers maintained an intimidating presence in the big cities.

Assad has been trying to crush a freedom movement for more than a year. CBS News correspondent Elizabeth Palmer is one of the very few foreign journalists reporting from inside Syria.

A crowd of worshippers leaving Douma’s mosque after Friday prayers became in the space of a few minutes — and just a few yards — a tsunami of protesters, ecstatic to be back in the streets of this opposition stronghold, a suburb of Damascus.

The demonstration was one of the biggest and loudest of the hundreds that erupted across the country. The protesters’ demands couldn’t be clearer: they want to see the end of President al-Assad’s regime, especially after the pounding this town’s taken from the Syrian military.

It was less than a week ago that a Syrian tank shell took out a side of a building behind Palmer. On Friday, the hole is acting as a spectator’s gallery for people who want to join the demonstration but can’t get down into the square.

Can’t — or don’t feel quite safe enough yet. The army has only pulled back to the edge of town and everyone is afraid the cease fire won’t hold.

Activists don’t feel safe enough either to be identified on television, even though for them it’s a red letter day. One person said: “It’s fantastic. Today we feel free.”

“What are you going to do next?” Palmer asked him.

“We keep continue. We will never stop.”

In the backstreets, members of the Syria Free Army were on guard respecting the cease- fire.

“We don’t believe the government will keep its word,” said Abu Ali, a Free Army soldier.” But we will.”

In the end, to general amazement, the cease-fire did hold at least for Friday. Douma’s demonstration broke up peacefully after a couple of hours. But say the organizers, this was just Round One. 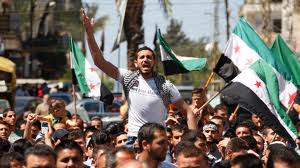 “CBS Evening News” anchor Scott Pelley spoke with correspondent Clarrissa Ward in Istanbul. She talked to a former official who had defected from the Syrian dictatorship about the way forward.

“That former official told us he has very little faith in this cease-fire and in the Syrian regime’s to maintain it,” said Ward, “precisely because he believes that these protests will become more widespread, that they will be larger in number. And that at a certain point, the Syrian regime will not be able to resist, so to speak, breaking the cease-fire. There’s a real sense that the opposition is almost waiting for this to happen, that they are hoping it will happen, so they can go back to the international community and the Security Council and put pressure on countries like Russia and China to really adopt a more aggressive stance against the Syrian regime.

Pelley then asked Palmer, who spoke to the people on the street, which way is the wind blowing.

“They are not thinking about this strategically at all,” she said. “They say they are willing to come out and demonstrate every Friday until forever. But if you say how that is going to translate into pressure on the Syrian government in the end to negotiate seriously, they haven’t got a good answer at all.”