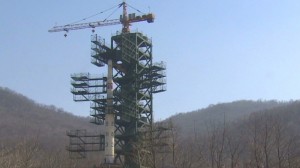 There was silence on the launch from officials in Pyongyang, which proceeded despite protests from the U.S., South Korea and other countries that called the launch a cover for a test of missile technology. North Korea said the rocket was part of a peaceful effort to send a satellite into space to the commemorate the anniversary of its founder’s birth.

In response to the launch, Washington announced it was suspending plans to contribute food aid to the North in exchange for a rollback of its nuclear programs.

The rocket exploded in midair one or two minutes after launching from the west coast launch pad in the hamlet of Tongchang-ri, said Maj. Gen. Shin Won-sik, a South Korean Defense Ministry official.

The U.S. North American Aerospace Defense Command said officials detected and tracked the launch of the rocket — which it called a missile — over the Yellow Sea; the first stage fell into the sea 165 kilometers (100 miles) west of Seoul, while stages two and three failed.

“At no time were the missile or the resultant debris a threat,” NORAD said in a statement.

North Korea had insisted it would not back down, and said the rocket would only carry a civilian satellite, touting it as a major technological achievement to mark the 100th anniversary of the birth of the country’s founder, Kim Il Sung, on Sunday.

Still, the rocket failure is a major embarrassment for Pyongyang, which has invited dozens of international journalists to observe the rocket launch and other celebrations.

It has staked its pride on the satellite, seeing it as a show of strength amid persistent economic hardship while Kim Il Sung’s grandson, the 29-year-old Kim Jong Un, solidifies power following the death of his father, longtime leader Kim Jong Il, four months ago.

“It blows a big hole in the birthday party,” said Victor Cha, former director for Asia policy in the U.S. National Security Council, contacted in Washington. “It’s terribly embarrassing for the North.”

He said the next step would be to watch whether North Korea conducts a nuclear test, as has been speculated by the South Korean intelligence community. North Korea is reportedly making preparations for such a test soon.

“We have to watch very carefully what they are doing now at the nuclear test site and how they explain this with all those foreign journalists in the country,” Cha said.

In Pyongyang, there was no word about a launch. North Korean officials said they would make an announcement about the launch “soon.” At Kim Il Sung Square, the city’s main plaza, residents were sitting around waiting for a rehearsal for upcoming celebrations.

Tokyo, which was prepared to shoot down any rocket debris that jeopardized its territory, also confirmed a launch from North Korea.

“We have confirmed that a certain flying object has been launched and fell after flying for just over a minute,” Japanese Defense Minister Naoki Tanaka said. He said there was no impact on Japanese territory.

North Korean space officials said the Unha-3, or Galaxy-3, rocket was meant to send a satellite into orbit to study crops and weather patterns — its third bid to launch a satellite since 1998. Officials took foreign journalists to the west coast site to see the rocket and the Kwangmyongsong-3 satellite Sunday in a bid to show its transparency amid accusations of defiance.

“For all their advanced technology, these rockets are fairly fragile things,” said Brian Weeden, a technical adviser at Secure World Foundation and former Air Force officer at the U.S. Space Command. “You’re looking at a metal cylinder that has fairly thin walls that contains a lot of high pressure liquid.”

Weeden said the launch appeared to be a failure of both space and missile objectives.

“The earlier it breaks up, the less data you’ve collected, so the less useful that test is likely to be,” he said. “It’s very likely that the U.S. and its allies probably gathered more information about this test than the North Koreans have.”

More U.S., Japanese and South Korean military assets were in place than ever before to monitor the launch — and it was expected to provide vital data on North Korea’s ballistic missile capabilities. A U.S. satellite is believed to have provided the first confirmation of the launch, according to Japanese media reports.

U.S. Navy minesweepers and other ships are in the area and expected to now begin scouring the seas for debris from the rocket, which can offer evidence of what went wrong and what rocket technology North Korea has.

Scott Pace, the director of the Space Policy Institute at George Washington University, said the North will be hard pressed to get any international help in recovering its lost rocket.

“I would not expect the North to receive any help in understanding what may have gone wrong,” he said. “The failure will certainly not be good for the engineers and managers responsible.”

The United States, Britain, Japan and others have called such a launch a violation of U.N. resolutions prohibiting North Korea from nuclear and ballistic missile activity.

Experts say the Unha-3 carrier is the same type of rocket that would be used to launch a long-range missile aimed at the U.S. and other targets. North Korea has tested two atomic devices but is not believed to have mastered the technology needed to mount a nuclear warhead on a long-range missile.

U.S. Secretary of State Hillary Rodham Clinton, speaking for the Group of Eight nations after their foreign ministers met in Washington, said Thursday that all the members of the bloc agreed to be prepared to take further action against North Korea in the Security Council if the launch went ahead.

“Pyongyang has a clear choice: It can pursue peace and reap the benefits of closer ties with the international community, including the United States; or it can continue to face pressure and isolation,” Clinton said.

The U.N. Security Council has scheduled a meeting Friday on the North Korea launch.