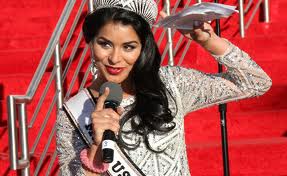 Rima Fakih, a former Miss Usa and the first Arab-American to be so, has pleaded no contest to a charge of drunk driving in the state of Michigan.

A no contest plea isn’t technically the same as pleading guilty but it is treated as the same for sentencing purposes and, if found guilty of the charge, Fakih could face a maximum of 93 days in jail.

Speaking outside the court rooms, the Miss USA 2010 winner said “You learn, you pay your price for making mistakes and you move on. I’m very happy I can put this behind me.”

CBS News reports that the model’s lawyer has predicted that Fakih would be charged probation which, he stated, she could undertake in California. This would be a preferable option for the 26 year-old as she would then be able to continue her career and pursuit of further opportunities in the entertainment business.

Fakih was arrested in December but has maintained that she wasn’t drinking on the night; this despite the fact that two different police breath tests put her blood alcohol content at more than twice the legal limit. Either way, it’s an embarrassing episode for someone who was praised back in 2010 for highlighting the positivity of cultural diversity when she took the Miss Usa crown.