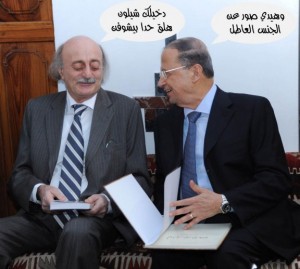 Hezbollah is reportedly seeking to improve ties between Progressive Socialist Party leader MP Walid Jumblatt and and its Christian ally Free Patriotic Movement chief MP Michel Aoun ahead of the 2013 parliamentary elections according to al-Hayat report on Sunday.

According to the report Hezbollah wants to improve these ties to achieve a March 8 parliamentary majority in 2013 and in order to guarantee Aoun’s superiority among Lebanon’s Christians through allying himself with Jumblatt in areas where the Druze leader enjoys strong political power, such as the Chouf, Aley, Hasbaya, and Rashaya.

Tensions emerged during the past six months between Jumblatt and Aoun as a result of disagreements over a number of issues including the electricity issue, the electoral law , the March 14 martyrs and the situation in Syria.

While Aoun favors the draft electoral law which is based on proportional representation , Jumblatt is dead against it and instead favors the current winner-take-all system, an amended version of the 1960 electoral law.

Interior Minister Marwan Charbel is proposing the draft law based on proportional representation .

Jumblatt’s former allies in the March 14 coalition hinted this week they will not endorse the Charbel draft if it curbs the influence of the PSP leader.

Although major political players have yet to announce a public clear-cut stance regarding the 2013 polls, Charbel maintains that all groups in the Cabinet, with the exception of the three ministers affiliated with Jumblatt, support his plan.

In 2006, the government-appointed National Commission for a New Electoral Law, known as the Boutros Commission, authored a draft law that proposed major changes to the electoral system, but the recommendations have since been shelved.

Last December , a meeting of Maronite leaders at Bkirki reached an agreement to adopt the Orthodox gathering’s proposal for the electoral law that will be used in the 2013 elections. The proposal called for each sect to elect its own MPs based on the 50 /50 allocation of Muslims and Christians in the parliament , as stipulated in the Taef accord. While Aoun came in favor of this proposed law Jumblatt rejected it.

“This law will lead to the isolation of people of different religious sects from each other,” Jumblatt said

“We live in a democracy and I hope we do not return to the election law of 1960 given that all the parties have highlighted the inadequacy of the 1960 law in today’s age,” Sleiman told reporters after a meeting with Patriarch Beshara Al Rai at Bkirki.