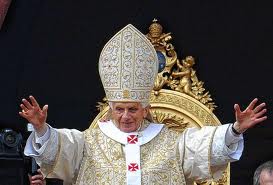 VATICAN CITY — Pope Benedict XVI implored the Syrian regime Sunday to heed international demands to end the bloodshed and expressed hope that the joy of Easter will comfort Christian communities suffering because of their faith.

Benedict, struggling with hoarseness and looking tired, celebrated Mass on Christianity’s most joyous holy day on the flower-adorned steps of St. Peter’s Basilica, before a crowd of faithful that swelled to far over 100,000 by the end of the 2-hour-long ceremony.

Only hours earlier the pontiff, who turns 85 on April 16, had led a long nighttime vigil service in the church. There have been concerns over his health, and he has recently used a cane in public appearances. He no longer walks down the basilica’s long aisle, traveling instead aboard a wheeled platform pushed by aides.

At the end of Sunday’s Mass, Benedict moved to the basilica’s central balcony to read his Easter message “to the entire world,” as he put it, delivering a ringing appeal for peace in Iraq, Syria and elsewhere in the Middle East, and in Africa, citing coup-struck Mali and Nigeria, where Christians and Muslims alike have been hit by terrorist attacks.

“May the risen Christ grant hope to the Middle East and enable all the ethnic, cultural and religious groups in that region to work together to advance the common good and respect for human rights,” the pope said.

“Particularly in Syria, may there be an end to bloodshed and an immediate commitment to the path of respect, dialogue and reconciliation, as called for by the international community,” Benedict said, making Syria the first of several strife-torn countries he mentioned in his traditional “Urbi et Orbi” (Latin for “to the city and to the world”) Easter speech.

The Syrian government on Sunday appeared to be backing out of a cease-fire deal aimed at ending the country’s crisis, saying that it will not withdraw its troops from cities without written guarantees from armed groups that they also will lay down their weapons. U.N. estimates put the number of dead in that conflict at some 9,000 since it began in March 2011.

Benedict also lamented that many Syrians who have fled the conflict are enduring “dreadful sufferings” and prayed that they would receive welcome and assistance.

Underlining the pope’s concern for the Middle East, the Holy See said Sunday the pope would make a three-day pilgrimage to Lebanon in September, celebrating Mass in Beirut and encouraging bishops and other churchmen in the Middle East.

Christians throughout the world on Easter celebrate their belief that Jesus Christ rose from the dead after his crucifix, and the day symbolizes hope. Benedict said that Christ is “hope and comfort in a particular way for those Christian communities suffering most for their faith on account of discrimination and persecution.”

Sectarian violence in Iraq, often aimed at Christians, has prompted an exodus over the last years of many from the sizable Christian community there.

Benedict also prayed that God sustain the Christian community in Africa, where the Catholic church has been enjoying vibrant growth in recent years.

“To Nigeria, which in recent times has experienced savage terrorist attacks, may the joy of Easter grant the strength needed to take up anew the building of a society which is peaceful and respectful of the religious freedom of its citizens,” he said. Terrorism has hit both the Muslim and Christian community in Nigeria.

He prayed that Mali, wracked by a recent coup, would see “peace and stability.”

To the delight of the cheering crowd below, Benedict recited Easter wishes in 66 languages. He had special greetings for the people of the Netherlands, expressing gratitude for some 42,000 potted plants and floral arrangements, including sprays of Japanese cherry blossoms, roses and orchids, that brightened the square and balcony on a sometimes sunny, sometimes cloudy and breezy morning.

Benedict sat in an armchair while reading the message but stood at the end, when he gave his Easter blessing.

In Jerusalem, thousands of Christians gathered for Easter celebrations, crowding into one of Christianity’s holiest churches, worshipping, singing and praying. Catholics and Protestants took turns to hold ceremonies within the ancient Church of the Holy Sepulcher, built on the site where many Christians believe Jesus was crucified and buried.

Thousands of Palestinian Catholics smashed egg shells against each other, representing Jesus’ emerging from his tomb. They ate circular bread symbolizing his crown of thorns and greeted each other with the Arabic felicitation, “Christ has arisen,” prompting the response: “Verily he has arisen.”

At the Vatican, Benedict encouraged Israelis and Palestinians to “courageously take up anew the peace process.”

Several dozen Ethiopian Christians who also use the older calendar gathered in a niche of the Sepulcher church, wearing long white robes, decked in white, blue and black rimless hats. They sang in their ancient language, marking off beats with a silver instrument that made a rattling sound.

In the United Kingdom, Queen Elizabeth II attended a traditional Easter Sunday service with three generations of the royal family at Windsor Castle. The monarch was joined on Sunday by her husband, the Duke of Edinburgh, and three of her children – Princes Andrew and Edward, along with Princess Anne. Her granddaughters, Princess Eugenie and Lady Louise Windsor, were also among those attending the service at St. George’s Chapel.

Dressed in a lilac, green and white Stewart Parvin silk dress with a lilac coat and matching hat by Philip Somerville, Elizabeth took time to greet well-wishers gathered outside the chapel after the service.