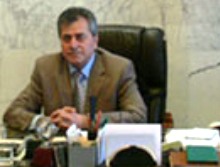 March 14 MP Ahmad Fatfat said on Friday that the report in Al-Hayat newspaper that was published earlier in the day about a Syrian embassy vehicle that was trying to smuggle arms from Lebanon to Syria was true.

Fatfat , who represents the Future Movement in the parliament also told MTV that “the vehicle belongs to the Syrian embassy and one of the people [involved in the smuggling] was the bodyguard of the son of former Internal Security Forces General Director Ali al-Hajj.”

Hajj was one of the four security chiefs detained for four years in the aftermath of the 2005 assassination of former Lebanese Prime Minister Rafik Hariri.

Al-Hayat newspaper reported earlier Friday that the Lebanese security forces apprehended two days ago a Lebanese military vehicle put at the disposal of the Syrian embassy transporting unlicensed weapons from Lebanon to Syria.

The Syrian envoy in Lebanon Ali Abdel Karim Ali , has been accusing the Lebanese opposition and specifically Future Movement ( which is headed by former PM Saad Hariri ) of smuggling arms to the Syrian opposition.