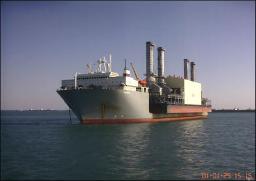 Energy Minister Gebran Bassil denied US company Waller Marine’s statement that its bid to provide-power generating ships was ruled out before it could present its final offer.

“[The ministerial committee studying the power-generating ship tenders] asked the company more than once for their [final] bid and there was no response, especially after we insisted that they reduce the price,” Bassil told Al-Jumhuriya newspaper in comments published Friday.

He also said that company tried to “stall” and avoided giving a final and definite price.

The company’s director general had told the daily that “the meeting with the committee lasted for only half an hour before Mikati asked us to reconsider the offer… but after three hours of waiting, the company’s delegation was surprised that the committee finished its work and left the Grand Serail without informing it of the final outcome or even apologize.”

The company also considered the tenders to be a “pre-planned deal” and the discussions to be “mere camouflage,” adding that its offer was very “tempting.”

In March, the cabinet agreed to rent power-generating ships for a period of two years renewable up to one year.

According to the reports the Turkish company agreed to reduce its offer by 9 % and to reduce the term of the contract from 5 to 2 years. The Turkish also reportedly pledged not to give commission to any party except its agent in Lebanon.

The issue of electricity has sparked controversy, especially since Prime Minister Najib Mikati had reservations over Bassil’s proposal to lease power-generating ships . Mikati submitted to the cabinet a proposal that calls for building a 500 MW plant at a cost of $480 million . According to Mikati’s proposal it would take one year to build the plant.

According to experts the power generating ships will not be able to solve the power rationing problem for Lebanon. Lebanon currently produces about 1500 MW but it needs 2500 MW. Furthermore the existing plants need to be overhauled and for this reason Lebanon may end up with less power than it currently has.

One Energy expert told Ya Libnan: ” Lebanon has missed many opportunities to improve electricity production” … ” electricity rationing is destined to increase in the coming years as a result of population and business growth… if we don’t build additional capacity” . Commenting on the way the electricity issue was handled by the cabinet he said ” This is Lebanon…we may be able to fix the problems of the world but not our own. Everyone knows what the real problem is but no one has the guts to address it. ”