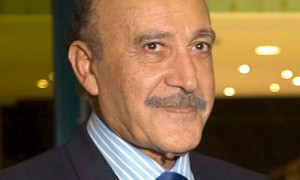 A former deputy of ousted President Hosni Mubarak announced his presidential candidacy on Friday, shaking up an already heated race that is emerging as a contest between former government officials and Islamists who have surged in influence.

The deputy, Omar Suleiman, was the chief of intelligence under Mr. Mubarak and one of the most powerful figures in his government. Mr. Suleiman had said this week that he would not run. But he said he changed his mind after hundreds of people rallied in Cairo to support him.

The announcement drew outrage from youth activists who spearheaded the popular uprising that toppled Mr. Mubarak last year and have since been disappointed by the continued influence of members of his former government. Liberals and revolutionaries have been largely squeezed out of the presidential race. Some have said they will boycott the election on May 23 and 24.

Mr. Suleiman, who appeared on television on Feb. 11, 2011, to announce that Mr. Mubarak would step down and hand power to the country’s military leaders, served as Egypt’s intelligence chief for 18 years at a time when the government was accused of abusing the human rights of dissenters.

That makes him suspect in the eyes of the many Egyptians who had hoped to stamp out the old order altogether and usher in a transition to democracy.

The Brotherhood’s Freedom and Justice Party posted Mr. Suleiman’s announcement to run for president on its Facebook page, with photos of Mr. Suleiman smiling and shaking hands with Israeli officials against a backdrop of the Israeli flag

Mr. Suleiman, a 75-year-old former general, must get either 30,000 signatures by Sunday’s filing deadline or the backing of at least 30 lawmakers to run.

But even if he meets the candidacy requirement, a victory seems unlikely, some analysts said. Tarek Shalaby, a blogger and liberal activist, said he did not believe that Mr. Suleiman had a strong chance of winning because he had been a central figure of Mr. Mubarak’s widely despised government. Mr. Shalaby said Mr. Suleiman’s bid would only push those fearful of Islamists to vote for Amr Moussa, a former Arab League chief and foreign minister who is seeking the liberal and secular vote.

Mr. Suleiman’s decision was the latest surprise in the first presidential race since Mr. Mubarak was ousted after nearly 30 years in power.

Last week, the Muslim Brotherhood, Egypt’s most organized Islamist movement, named its chief strategist and financier, Khairat el-Shater, as a candidate, reversing an earlier pledge not to participate in the election. The Brotherhood already controls about half of the seats in Parliament and would completely dominate the political arena if Mr. Shater wins.

The Brotherhood’s Freedom and Justice Party posted Mr. Suleiman’s announcement to run for president on its Facebook page, with photos of Mr. Suleiman smiling and shaking hands with Israeli officials against a backdrop of the Israeli flag.

“This is a bullet to the Egyptian revolution,” the Brotherhood party’s spokesman, Ahmed Khairy, said. Mr. Suleiman, who was appointed vice president shortly after the uprising began, is well known and respected by American officials and has traveled to Washington many times. He was the point person handling the relationship with the United States and Israeli-Egyptian ties under Mr. Mubarak.