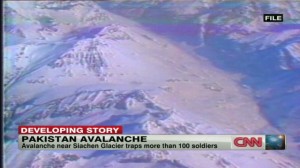 ISLAMABAD – An avalanche smashed into a Pakistani army base on a Himalayan glacier along the Indian border on Saturday, burying around 100 soldiers, the military said.

Helicopters, sniffer dogs and troops were deployed to the remote Siachen Glacier to rescue those trapped, according to a military statement.

The avalanche hit a battalion headquarters in the glacier’s Gayari sector at 5:45 a.m, according to a security official who didn’t give his name because he is not an official spokesman.

Siachen is on the northern tip of the divided Kashmir region claimed by both India and Pakistan.

Both countries station thousands of troops there, who brave viciously cold temperatures, altitude sickness and high winds for months at a time. Troops have been deployed at elevations of up to 6,700 meters (22,000 feet) and have skirmished intermittently since 1984, though the area has been quiet since a cease-fire in 2003. The glacier is known as the world’s highest battlefield.

The headquarters in Gayari is the main gateway through which troops and supplies pass on their to other more remote outposts in the sector. It is situated in a valley between two high mountains, close to a military hospital, according to an officer who was stationed there in 2003.

“I can’t comprehend how an avalanche can reach that place,” said the officer, who didn’t give his name because he is not authorized to speak to the media. “It was supposed to be safe.”

More soldiers have died from the harsh weather than combat on the glacier, which was uninhabited before troops moved there.

Conflict there began in 1984 when India occupied the heights of the 78-kilometer (49-mile)-long glacier, fearing Pakistan wanted to claim the territory. Pakistan also deployed its troops. Both armies remain entrenched despite the cease-fire, costing the poverty-stricken countries many millions of dollars each year.

More soldiers have died from the harsh weather than combat on the glacier, which was uninhabited before troops moved there.

Pakistan and India have fought three wars since the partition of the subcontinent on independence from Britain in 1947. Two of the wars have been over Kashmir, which both claim in its entirety.