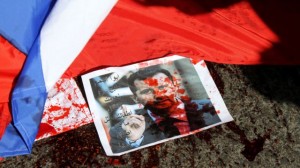 Syria’s opposition will never defeat President Bashar al-Assad’s army even if it is “armed to the teeth,” Russia’s Foreign Minister Sergei Lavrov was quoted as saying on Wednesday.

“It is clear as day that even if the Syrian opposition is armed to the teeth, it will not be able to defeat the government’s army,” Interfax quoted Lavrov as saying while on a visit to the ex-Soviet nation of Azerbaijan.

“Instead, there will be carnage that lasts many, many years – mutual destruction,” said Lavrov.

Russia has emerged as the Syrian regime’s closest ally and has previously sought to protect its Soviet-era trade partner against Western sanctions and possible foreign military intervention.

But Moscow has stepped up its criticism of Assad in recent weeks and has backed along with Arab and Western nations the six-point peace plan put forth by UN-Arab League envoy Kofi Annan for resolving the year-long crisis.

Lavrov said that two Syrian opposition groups will be visiting Moscow soon and that Russia will be using the meetings to convince them it wants to help end violence that the UN says have claimed more than 9,000 lives.

He added that Syria’s foreign minister would also be coming to Moscow on April 10.

“Right now, representatives of one group of the opposition are coming (to Moscow), and a few days later a second group will come from the domestic opposition,” Lavrov said without providing further details.

Russia last month said that it planned to soon host members of a moderate opposition group called the National Coordination Committee for Democratic Change in Syria.

“It would make sense to convince them that we also want to help resolve this problem,” the RIA Novosti news agency quoted Lavrov as saying.

Russia has also been highly critical of the so-called ‘Friends of Syria’ meetings that group Western powers and some Arab states.

Its latest conference last weekend in Istanbul recognised the opposition Syrian National Council (SNC) as a “legitimate representative” of all Syrians.

Lavrov called the move counterproductive because it discouraged the rebels from engaging in talks.

“If besides supporting Kofi Annan’s plan (nations) also hold ‘Friends of Syria’ meetings in Istanbul – ones that are aimed at ensuring that the opposition does not agree to negotiations – this only undermines efforts to stop the violence,” Lavrov said.