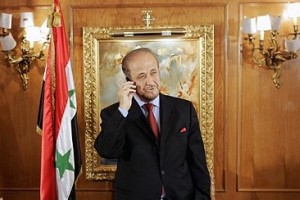 Rifaat al-Assad, the exiled uncle of Syrian President Bashar al-Assad, has said it is unlikely his nephew can hold on to power for much longer.

In an interview with the BBC, Rifaat, 73, who led a military assault on Hama in 1982 to suppress an uprising, killing up to 40,000, said: “The problems are now general to all parts of Syria – there are no places that have escaped violence – so I don’t think he can stay in power.

“I would say, though, that he should stay so he can co-operate with a new government and offer the experience he has.”

Despite his comments, he insisted that the Assad family was still “pretty much accept by the Syrian people.”

Rifaat has lived in exile since unsuccessfully attempt to seize power from his brother Hafez, in the 1980s.

His comments came as fierce clashes broke out Tuesday between Syrian troops and rebels as the regime sent reinforcements into some hot spots, despite a pledge by President Bashar al-Assad to implement a peace plan.

The Syrian Observatory for Human Rights said fighting was taking place in the southern province of Daraa, in northwest Idlib province and near the capital.

In Dera’a, cradle of the one-year uprising against Assad’s regime, fighting erupted overnight in the town of Inkhel after rebels attacked army checkpoints.

In the same region, dozens of troop carriers arrived in the town of Dael, where the army carried out raids and arrests the day before.

Sayyed Mahmud, an activist in Daraa reached by Skype, told AFP the situation was extremely tense in Dael.

“They burned down 14 houses yesterday. They are arresting people and have sent in troop reinforcements,” he said.

“As part of the regime’s campaign to starve the people, troops are raiding homes, destroying food stocks and equipment,” he added. “For example, if they see a sowing machine, they destroy it.

“They go into bakeries and destroy the dough. There are 15-hour power cuts a day.”

In Idlib, heavy fighting was taking place on the outskirts of the town of Taftanaz, where two civilians and one soldier were killed amid heavy machinegun fire and shelling, the Observatory said.

“Four civilians have been wounded and several homes torched,” it added. “Rebels managed to disable a troop carrier and have killed or wounded a number of government troops.”

In Damascus province, clashes were reported in the towns of Douma and in Zabadani, where the army was carrying out arrests and raiding homes.

The Observatory said dozens of troop carriers had arrived in Zabadani in early morning.

The unrest was taking place as Red Cross chief Jakob Kellenberger was on a fresh mission to Syria – his third since last year, when Damascus launched a crackdown on anti-government protests which the UN says has left more than 9,000 dead.

Annan said Assad had agreed to “immediately” start pulling troops out of protest cities and complete a troop and heavy weapon withdrawal by April 10, US Ambassador Susan Rice said after Annan briefed the UN Security Council.