Syria's first lady claims to have the personality of a 'monster' 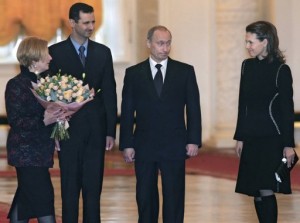 Syrian President Bashar al-Assad’s wife, Asama, told a friend that she had concluded that she was a ‘monster’ after completing an online personality test, a cache of leaked private emails have revealed.

The friend was Azmi Mikati, the nephew of the Lebanese prime minister, who the emails suggest was a key link with the outside world for the increasingly besieged Assad family.

He exchanges several emails with President Bashar al-Assad, who asks him for help buying iTunes.

But he emails more regularly with the British-born Mrs Assad, 36, who asks him a variety of favours, including buying a Harry Potter DVD and finding a customised wheelchair for an unspecified person.

Mr Mikati replies to her “monster” claim by saying that he has looked up the dictionary definition of “monster”, which is “a person having qualities generally attributed to an angel, as beauty, purity, intelligence and kindliness”.

It was to Mr Mikati that she said she was “the real dictator” in the Assad family.

She also seeks views on her husband’s speeches and interviews from the globe-trotting communications executive whose father and uncle made billions from one of Lebanon’s major mobile phone companies.

More than 3,000 messages from the Assads’ private accounts, dating from June to February, were provided by the media by opposition activists after a suspected mole discovered their password.

They included numerous flirtatious and suggestive messages to Mr Assad from various women, some working as advisers.