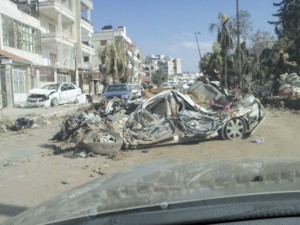 With the year-long bloodshed showing no signs of abating, the U.N.-Arab League peace envoy for Syria, Kofi Annan, flew to Moscow in an effort to secure strong Russian support for his efforts to bring about a ceasefire and open political dialogue.

While Western and Arab states are calling for President Bashar al-Assad to stand down first, Russia is putting the onus on the armed rebels and their foreign supporters to halt their year-long uprising, saying its long-time ally Syria was ready for talks.

“Russia sees an immediate end of violence in Syria is a priority,” the Kremlin said in a statement on Saturday, a day ahead of Annan’s meeting with President Dmitry Medvedev.

“… the key task is to convince the Syrian opposition to sit down at the negotiation table with the authorities and reach a peaceful resolution of the crisis,” it added.

On the ground, the idea of a negotiated peace seemed more remote than ever, with clashes reported in numerous locations.

Four died in Homs, the epicentre of the anti-Assad revolt, as the central city suffered another day of what activists said was indiscriminate gunfire and shelling on residential areas.

“The shelling started like it does every morning, for no reason. They are using mortar and tank fire on many neighbourhoods of old Homs,” an activist in Homs’s Bab Sbaa district told Reuters by Skype.

He said most residents in the area had fled to safer districts and many were trying to escape the city altogether.

Syrian troops have repeatedly targeted Homs, Syria’s third largest city, and said last month they had regained the one-time rebel bastion. However, a sharp upswing in violence this past week suggests they are struggling to maintain control.

However, the Homs activist, who declined to be named for fear of reprisals, suggested the opposition Free Syrian Army was also incapable of re-establishing their authority.

“The Free Syrian Army had been in Bab Sbaa when the army started shelling the area four days ago and they weren’t able to block the army raids because they were getting hit by mortars at the same time that armoured vehicles were coming in,” he said.

“We only have a few rebels here left, there is nothing they can do,” he added.

Independent verification of the reports is impossible because the Syrian authorities have barred access to foreign journalists and human rights workers.

Further to the north, security forces killed at least one person and wounded dozens more in raids on Saraqib, in Idlib province bordering Turkey, according to the British-based Syrian Observatory for Human Rights (SOHR), which has a network of contacts in Syria.

“There are dozens of tanks and armoured vehicles storming Saraqib now and there is heavy artillery fire,” an activist called Manhal said via Skype.

“A portion of the rebels have made a strategic retreat, but there are rebel forces still inside, and about a third of residents have fled the town,” he added. SOHR later said around 60 percent had left Saraqib.

In the southern province of Deraa, birthplace of the revolt, SOHR said a man was shot dead at a checkpoint in an area where a soldier had been gunned down. Three other soldiers were killed in an attack in the northeastern province of Hasaka, it said.

Activists in the city of Douma, just north of the capital Damascus, reported hearing explosions from heavy fighting overnight as ambulances raced through the streets. By late morning they said the fighting had eased and reported seeing armoured vehicles and snipers deployed.

Army forces were also bombarding the town of Qalaat al-Madyaq, close to Hama, in central Syria. SOHR said government troops had have been trying to storm the city for two weeks, but have met stubborn resistance.

More than 8,000 people have died in the uprising, according to U.N. figures, with Western and Arab states accusing the Syrian army of committing widespread brutal abuses.

The Syrian government says rebels have killed some 3,000 security forces and blames the violence on “terrorist” gangs.

Annan is leading international efforts to bring peace and has drawn up a six-point plan, including demands for a ceasefire, the immediate withdrawal of heavy armour from residential areas and access for humanitarian assistance.

Attempts to halt the conflict have been stymied by divisions between world powers, with Russia and China having so far vetoed two U.N. resolutions highly critical of Damascus.

However, the pair did support a Security Council resolution earlier this week endorsing Annan’s mission and the former U.N. chief is due to fly to Beijing after his Russia talks.

Moscow has accused the West of being too one-sided in the conflict, arguing that outside support for rebels is fuelling the fighting in Syria, which hosts a Russian naval base.

“We intend to outline at the forthcoming meeting our essential approach to ensure ceasefire and end of violence in Syria, which would be difficult to enforce until external armed and political support of the opposition is terminated,” the Kremlin statement said on Saturday.