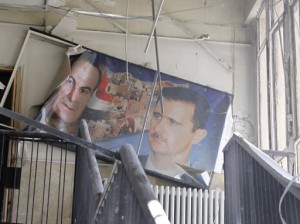 A car bomb hit Syria’s second city Aleppo yesterday, a day after blasts killed 27 in Damascus, and security forces arrested and beat activists at a rare anti-government protest in the center of the capital.

The British-based opposition Syrian Observatory for Human Rights said at least three people had been killed and 25 wounded by the explosion close to a state security office in Aleppo.

State news channel Syria TV said the “terrorist” attack had been between two residential buildings in the Al-Suleimaniya district, behind a post office building.

Activists and the government traded blame for the explosion, as they have over previous bombings.

The TV channel showed pictures of bloody bodies and charred buildings from earlier blasts. “Their gift to us,” said a caption, followed by a bloody handprint.

“Their fingerprints are obvious.”

But an activist in Aleppo from the opposition’s local Revolutionary Council said the government was behind the attack.

“These explosions are always done by the regime to discourage people from joining the revolution … they want to make our uprising seem like a terrorist operation to the rest of the world, but it is not,” said the activist, who called himself Marwan.

The opposition reported heavy raids by security forces and fighting with rebels in northern and southern Syrian provinces and suburbs of Damascus.

In the capital, as crowds gathered for memorials to victims of Saturday’s car bombs, security forces broke up an opposition march of more than 200 people when protesters began shouting “the people want to topple the regime.”

The phrase has echoed through the wave of Arab uprisings that began last year and has toppled autocratic rulers in Tunisia, Egypt, Libya and Yemen.

“They were walking through an area in central Damascus, near SANA (the state news agency). At first they shouted slogans against violence and the police didn’t do anything, but as soon as they started to call for regime change the police rushed in and started beating people with canes,” said Rami Abdelrahman, from the Syrian Observatory for Human Rights. The protest, which called for nonviolent resistance to the government, had been led by moderate opposition leaders previously tolerated by the government because of their calls for dialogue and rejection of foreign intervention.

Activists said the Sunday march aimed to commemorate the peaceful roots of Syria’s uprising, which has been overshadowed by a growing armed insurgency against state security forces.

Security forces arrested Mohammed Sayyed Rassas, a leader of the National Coordinating Body for Democratic Change (NCB), an opposition group which had visited China and Russia in attempts to promote dialogue between Assad and the opposition.

Most opposition groups have rejected the NCB over its insistence on non-violence and its stance against foreign intervention, arguing the government’s fierce crackdown has made arming the uprising inevitable.

“It’s clear that the battle is finishing in the regime’s favor overall,” said a Lebanese official close to Assad’s government.

“On the security level there is a long and difficult struggle for the regime and it is obvious this will take a long time to finish … We will see many more explosions like those we saw yesterday but in general they have finished off the military fight and they don’t have much more to do.”

The United Nations says more than 8,000 people have been killed by security forces in the crackdown on a revolt against four decades of rule by the Assad family. The struggle has become increasingly bloody as peaceful protest has given way to rebellion by armed groups. Authorities say they are fighting foreign militants who have killed more than 2,000 members of the security forces.

Rebels also blew up a bridge in southern Daraa, birthplace of the uprising, the Observatory said. The bridge had been used to transport supplies to security forces who surround the city.

In central Damascus, crowds of Syrians gathered at the sites of the two car bombings outside security bases on Saturday.

Dozens of people waving Syrian flags gathered to pray for the victims.