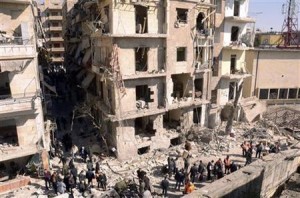 A car bomb ripped through a residential area of Syria’s second city Aleppo on Sunday, as activists reported heavy clashes across the country between state forces and rebels fighting to overthrow President Bashar al-Assad. The explosion came a day after twin blasts killed 27 people in the capital Damascus and wounded nearly 100 others.

World powers have been unable to stop more than a year of bloodshed in Syria, a country that sits on the fault lines of several regional and ethnic conflicts. Recent army gains against rebel positions have shown no sign of quelling the violence and no negotiated settlement is in sight.

In Aleppo, Syria’s commercial hub, state news agency SANA said terrorists were behind the car bomb that killed two people and wounded 30 others when it exploded in a central area close to a state security office and a church.

Opposition activists accused the government of staging the explosion to back up its official line that foreign-backed extremists are behind the uprising. The government says about 2,000 members of security forces have been killed in the unrest.

Aleppo had seen less unrest than much of Syria but has recently been hit with more violence as revolt spreads and becomes increasingly bloody. The United Nations says more than 8,000 have been killed and humanitarian conditions are grim.

The semi-official news channel al-Ikhbariya said security forces had been tipped off about the bomb in Aleppo and had been moving residents out of the area when it went off. It said the car had been filled with 200 kilogrammes of explosives.

“The explosion came suddenly and the only thing I thought to do was fall to the ground,” a girl told Syria TV, her hands and face covered in shards of glass. “Nothing remained. All the building fronts collapsed. God curse them.”

No group claimed responsibility for the Aleppo attack, and an activist from the opposition’s local Revolutionary Council said the government was behind the explosion.

“They want to make our uprising seem like a terrorist operation to the rest of the world, but it is not,” said the activist called Marwan, who spoke to Reuters by telephone.

The Syrian Observatory for Human Rights said at least 19 people, including four children, had died in rocket and gunfire during army raids and fighting with rebels across the country on Sunday.

Fighting was heaviest in the northwestern province of Deir Ezzor, where activists said rebels had taken over some of the streets in the provinces main city and had torched at least two army vehicles. At least 14 soldiers and five rebels died in the fighting, which calmed by evening, the Observatory said.

In the southern province of Deraa, a sniper shot dead two men in Dael, the British-based Observatory said, and thousands took to the street to mourn the deaths and protest four decades of Assad family rule.

In northern Idlib, gunmen shot dead a Turkish lorry driver, Turkey’s state-run Anatolian news agency said, but it did not specify when the attack took place.

Reports from Syria are difficult to verify as the government has restricted access to foreign journalists.

Aid groups also have limited access but were recently allowed a joint mission between staff from the Organization of Islamic Cooperation, the Syrian government and the United Nations. The group is now in Damascus planning the mission.

The head of the International Committee of the Red Cross Jakob Kellenberger was on his way to Moscow on Sunday to ask Russia to help persuade Damascus to let more humanitarian aid into the country.

In the capital, as hundreds gathered to mourn victims of Saturday’s car bombs, activists said security forces beat and arrested people at a march of more than 200 when protesters began shouting “the people want to topple the regime”.

The phrase has echoed through the wave of Arab uprisings that began last year and has toppled autocratic rulers in Tunisia, Egypt, Libya and Yemen.

“At first they shouted slogans against violence and the police didn’t do anything, but as soon as they started to call for regime change the police rushed in and started beating people with canes,” said Rami Abdelrahman, head of the Observatory.

The protest, which called for non-violent resistance to the government, had been led by moderate opposition leaders previously tolerated by the government because of their calls for dialogue and rejection of foreign intervention.

Activists said the Sunday march aimed to commemorate the peaceful roots of Syria’s uprising, which has been overshadowed by a growing armed insurgency against state security forces.

Security forces beat and arrested Mohammed Sayyed Rassas, a leader of the National Coordinating Body for Democratic Change (NCB), an opposition group which had visited China and Russia in attempts to promote dialogue between Assad and the opposition.

Most opposition groups have rejected the NCB over its insistence on non-violence and its stance against foreign intervention, arguing the government’s fierce crackdown has made arming the uprising inevitable.

Security forces also arrested Farzand Omar, a doctor and politician from the party “Building the Syria State,” when he arrived at the Damascus airport from his hometown of Aleppo.

“His arrest confirms once again that Syrian authorities repress all their opponents and are dishonest in claiming that they respect and accept member of the Syrian opposition or accept dialogue,” the party said in a statement.

Syrian government forces have crushed a rebel stronghold in the central city of Homs and have been pounding rebel strongholds in northern Idlib. Activists reported heavy clashes and extensive security force raids in the embattled province, which borders Turkey.

“It’s clear that the battle is finishing in the regime’s favour overall,” said a Lebanese official close to Assad’s government.

Rebels argue they are making tactical retreats and will continue to reappear whenever the army eases its grip, hoping to tire out Assad’s forces.

“On the security level there is a long and difficult struggle for the regime and it is obvious this will take a long time to finish,” the Lebanese source said. “We will see many more explosions like those we saw yesterday but in general they have finished off the military fight and they don’t have much more to do.”