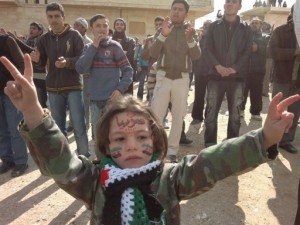 A year into the Syrian uprising, it was not the opposition but the government of President Bashar Assad that made a point of conspicuously marking the anniversary.

Raucous pro-Assad rallies Thursday in the streets of Damascus and other Syrian cities were the latest triumphal signal from a government widely described from outside as besieged or doomed.

While four other Arab autocrats have fallen from power in the last 14 months, the tenacious Assad has managed to hold on — despite a raging revolt that has swept large swaths of the nation and seen armed rebels occupy extensive territory, at least temporarily.

Behind the sense of triumph evident Thursday on the streets of Damascus were recent battlefield victories in the restive provinces of Idlib and Homs, where government troops were able to rout outgunned rebels who had for months occupied “liberated” territory. In the end, the rebels’ rifles and homemade bombs were no match for the government’s tanks and artillery.

“Even one bullet from a Kalashnikov was responded with by a tank shell,” said Mazen Arja, an opposition media activist in Idlib.

Having once anticipated that Assad would make an expeditious exit, officials from Washington and other Western capitals now acknowledge that he could cling to power for quite some time.

In August, President Obama and European allies publicly called on Assad to step down. But despite his government’s bloody response to its own people, Western military intervention, which theoretically could speed Assad’s departure, seems to be off the table. Any such undertaking would encounter objections from Russia and China, veto-wielding nuclear powers on the United Nations Security Council; the challenge ofSyria’s difficult terrain and extensive antiaircraft batteries; and uncertainty about a largely unknown opposition that may include a substantial contingent of Islamist militants.

The Assad government “still has a strong grip” on its security apparatus and can be expected to fight until the end, said one U.S. official who asked not to be identified.

“These guys know there’s no way out and there’s almost nothing they won’t do,” said the U.S. official.

Most of Assad’s senior leadership — many of them key figures from the president’s Alawite sect, an offshoot of Shiite Islam — remains in place despite calls from Secretary of State Hillary Rodham Clinton and others that they join the opposition. Many Alawites have come to view the increasingly sectarian battle as a fight for survival, fearing for their fate if the nation’s Sunni Muslim majority seize control.

At the top is a military and intelligence structure set up by Assad’s father, Hafez, who was long recognized as one of the most ruthless and cunning of Middle Eastern despots, having brutally crushed a 1980s uprising.

The opposition’s evolution from a protest movement to an armed rebellion has posed strong challenges for the security forces, which have lost 2,000 members in the fighting, according to the government. But some say the increasingly violent nature of opposition forces has alienated middle-class Syrians and others fearful of Iraq-style chaos and sectarian violence should Assad fall.

Yet even if things may be looking better for Assad now than a few weeks ago, when armed rebels were literally at the doorstep of Damascus, the long-term outlook for his government’s survival remains bleak, many experts say. Assad’s power is steadily eroding amid a crumbling economy, diplomatic isolation and an insurgency now schooled in sabotage and roadside bombings, they say.

“He could be around, but extremely weakened,” said Emile Hokayem, an analyst with the International Institute for Strategic Studies in Bahrain. “You can’t see it in simple black-and-white terms.”

Inside the embattled presidential palace, there is undoubtedly relief at the continued global impasse about how to deal with Syria.

In resigning from the group, eminent dissident Haitham Maleh labeled the council autocratic, not unlike Syria’s long-ruling Baath Party, he said. “They don’t want to play the democracy side,” Maleh said of the council.

But on the ground, Assad faces an opposition unified in one goal: his overthrow.

And although the rebels may be outgunned now, the prospect of weapons from Saudi Arabia and Qatar lies just over the horizon. Both nations have publicly backed arming the rebellion, though opposition officials and rebels inside Syria say it has yet to happen.

Some experts say Assad’s recent military victories may prove hollow if, as has happened in the past, his overstretched forces have to abandon parts of Idlib and Homs to put out fires elsewhere. Some liken his military predicament to that of U.S. forces during the height of the Iraqi insurgency: American troops were able to take and occupy Fallouja, Samarra and other rebel strongholds, but holding on after the forces pulled out proved problematic.

“This is not the first time the regime claims to have won a victory,” noted Peter Harling of the Brussels-based International Crisis Group. “The regime is making a statement…. It has the firepower, the military capacity to retake any part of the country. But then what does it do? Here is where the regime has no answer.”

Assad has proved that his government will not hesitate to take harsh steps to retain power. More than 8,000 civilians and opposition fighters have died since the revolt began, according to the U.N.

“This regime will continue to kill if nobody stops it,” said Anwar Bunni, a prominent human rights lawyer and regime opponent in Damascus, the capital.

Opposition leaders say repeatedly they have no plans to back down. Insurgent families in Idlib province have talked about spending all their savings to buy rifles. Many Syrians have lost loved ones. Talk of a fight to the death is regularly heard in opposition circles. Assad’s proposed “reforms,” such as a new constitution and parliamentary elections, have done little to end demands for his ouster.

“The problem the regime faces is its relationship with a large cross section of its people,” Harling said. “The regime seems to be making no progress whatsoever in mending that broken relationship.”