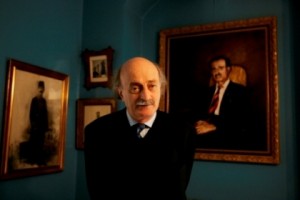 Progressive Socialist Party leader MP Walid Jumblat placed on Friday the Syrian rebels’ flag on the grave of his father in al-Mukhtara on the anniversary of his assassination.

According to the National News Agency, a number of ministers and MPs were present during the commemoration.

The party reiterated in a statement that the 35th assassination anniversary of its founder Kamal Jumblat will not be commemorated with a popular rally.

“The party will only head to the grave to place flowers,” the statement said.