Israelis and Palestinians agree to ceasefire mediated by Egypt 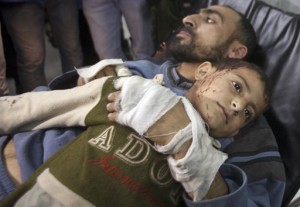 A ceasefire has been agreed between Israel and Palestinian militants in Gaza after four days of deadly clashes, an Egyptian official says. A Hamas official later confirmed that the truce had been agreed. At least 25 Palestinians have died in Israeli air strikes since Friday, reports say.

The official was quoted as saying that the Egyptian-mediated truce took effect at 1:00AM local time.

The Egyptian official – who spoke on condition of anonymity – was quoted by Reuters as saying late on Monday that both Israel and Gaza militants had “agreed to end the current operations”.

The official told the BBC that Israel had made an unusual promise to stop targeting militant leaders in Gaza, if rocket attacks on Israel ceased.

Israel has not publicly commented on the reported ceasefire.

The cross-border violence was triggered by an Israeli air strike on Friday that killed a senior leader of the militant group, the Popular Resistance Committees (PRC), who Israel said had been planning an attack.

Most of those killed in Gaza were militants, but several civilians also died, Palestinian medical sources say.

The US has condemned the rocket attacks as “cowardly”; the Arab League called the Israeli air strikes “a massacre”.

Islamic Jihad and the PRC – and not Hamas – have said they have been behind the rocket attacks.

The increase in violence has alarmed world powers trying to bring peace talks between Palestinians and Israelis back on track.