Clinton: Now is the time for all nations to stand by Syrian people 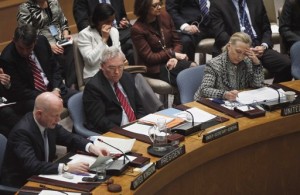 The UN Secretary General Ban Ki-moon and the US secretary of state have urged the international community to speak with one voice on Syria.

Hillary Clinton said that Syria’s “horrific campaign of violence” had “shocked the conscience of the world”.

In Syria, activists report that at least 47 people were killed in an attack by government militia in Homs.

Women and children are among those reported to have been tortured and killed on Sunday night in the neighbourhood of Karm el-Zeytoun. The Syrian government acknowledged the deaths, but blamed “armed terrorists”.

‘Now is the time’

Ms Clinton told the UN Security Council meeting in New York: “We believe that now is the time for all nations – even those who have previously blocked our efforts – to stand behind the humanitarian and political approach spelled out by the Arab League.”

In a clear reference to China and Russia, she appealed to the international community to “say with one voice – without hesitation or caveat – that the killing of innocent Syrians must stop and a political transition must begin”.

Her words echoed those of British Foreign Secretary William Hague, and of Mr Ban who said the Syrian government had “failed to fulfil its responsibility to protect its own people and instead has subjected its citizens in several cities to military assault and disproportionate use of force”.

He said the Council must “unite strongly” behind UN and Arab League peace envoy Kofi Annan’s efforts “to help Syria pull back from the brink of a deeper catastrophe”.

Russia’s Foreign Minister Sergei Lavrov said the situation in Syria remained a “grave concern” but warned that change in the Arab world “must not be achieved by misleading the international community or manipulating the Security Council”.

After the meeting, he said the Russian government was in regular contact with Syrian authorities and dismissed suggestions that Russia’s opposition to any resolution was single-handedly preventing a solution to the crisis.

“The founding fathers of the UN decided that unless the permanent members agreed on something, decisions could not be sustainable. Let’s try to be respectful of each other and each other’s positions,” he said.

“I think it is encouraging that the foreign minister of Russia and the Arab League had a discussion and the need for a political process has been recognised by Foreign Minister Lavrov, something we and many Arab ministers have called for all along,” he said.

The attack in the embattled city of Homs happened hours after Mr Annan ended his two-day mission to Damascus.

Homs has been under assault for weeks as government forces have tried to root out rebel fighters. Parts of the city are devastated.

Hundreds of families fled the Karm el-Zeytoun area of Homs on Monday after reports of the attack in their neighbourhood overnight, the British-based Syrian Observatory for Human Rights said.

One activist in Homs, Hadi Abdallah, told AFP the bodies of 26 children and 21 women were found, some with their throats slit and others bearing stab wounds.

Both the opposition Syrian Revolution General Commission (SRGC) and the Local Co-ordination Committees (LCC), an activist network in Syria, put the toll at 45.

The SRGC said that some of the victims had been burned alive with heating fuel poured over them and others had their necks and limbs broken.

Mulham al-Jundi, an opposition activist and member of the SNC, said Karm el-Zeytoun was experiencing a military bombardment similar to the one seen in Baba Amr district in recent weeks.

Reports are difficult to verify because of tight restrictions on independent media operating in Syria.

Footage posted on YouTube, said to show the bodies of men, women and children killed in the attack, made for grim viewing, said the BBC’s Jon Donnison in neighbouring Lebanon.

In one video, at least 11 bodies can be seen, including at least four young children covered in blood, he adds.

Syrian state television accused “armed terrorist gangs” of carrying out the killings, saying the bodies had been filmed in an effort to discredit the government.

Both the LCC and the Observatory blame the pro-government Shabiha militia for the attack. The group has been blamed for many of the atrocities carried out since the uprising began nearly a year ago.

Kofi Annan left Syria on Sunday after two days of talks with President Assad, saying he was “optimistic” about the possibility of a ceasefire, humanitarian access to affected areas and future political dialogue.

He said he had presented Mr Assad with “concrete proposals” to bring an end to the bloodshed, but gave no hint that a deal was imminent.

Reports say Mr Annan is due to meet representatives of the opposition Syrian National Council in the Turkish city of Istanbul on Tuesday.