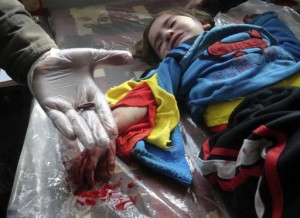 Videos showing the mutilated bodies of dozens of women and children killed in the central Syrian city of Homs were posted on the Internet early Monday, offering evidence of what activists said was a massacre of civilians by government forces.

The Syrian government countered with allegations that “terrorist armed groups” had killed the victims and then filmed their bodies to influence discussions at the United Nations Security Council later on Monday, and to shore up Syrian opposition calls for “foreign interference in Syria.”

With foreign journalists barred from carrying out independent reporting in Syria, the claims were impossible to verify. But the footage of mangled, bloodied corpses gathered together in a makeshift field hospital, as well as an earlier video showing the bodies of about a dozen men who had been shot dead in a yard, pointed to the danger that the conflict in Syria is sliding into a vicious civil war.

The killings were apparently carried out as Kofi Annan, the U.N. special envoy for Syria, concluded a failed two-day mission to Damascus aimed at trying to secure a negotiated settlement. Though Annan told reporters that he was “optimistic,” Syrian President Bashar al-Assad made it clear he was not prepared to countenance negotiations until the nearly year-long uprising against his rule is crushed.

“Political dialogue or political process cannot succeed as long as there are armed terrorist groups … that are working to spread chaos and destabilize the country,” the Syrian Arab News Agency (SANA) quoted him as telling Annan on Saturday.

The opposition has said it will not enter into negotiations with the government as long as the Syrian security forces continue to shell cities and detain activists.

These latest killings underscored fears that widespread atrocities might be taking place in Homs as the Syrian government presses its offensive to regain control of the city, suppress dissent and crush the armed rebel movement known as the Free Syrian Army.

Omar Shakir, a Syrian activist in Lebanon who fled the recent onslaught against the neighborhood of Baba Amr but who continues to monitor developments in Homs, said as many as 45 women and children were killed Sunday, along with a handful of men, in the neighborhood of Karm el-Zeitoun. Most of them had been stabbed, and some of the bodies were burned.

The victims, he said, were Sunni Muslims and were killed when members of the irregular pro-government militias known as shabiha raided the area from an adjoining Alawite neighborhood.

Activists discovered the bodies and gathered them together after some residents fled the area and raised the alarm. Early Sunday morning, scenes of the bodies being gathered together in a field hospital were livestreamed over the Internet, showing the disfigured corpses.

The account given by SANA said, however, that the bodies belonged to victims of earlier kidnappings by “terrorists.” It quoted several men as saying they recognized their relatives from the videos.

Another video posted late Sunday showed about a dozen men who had been shot dead in the Jobar district of Homs, where many of those who fled the recent attack on the former opposition stronghold of Baba Amr had taken refuge.

Since Syrian troops overran Baba Amr earlier this month, they have intensified efforts to crush resistance in other parts of the city that had fallen out of government control. Communications to most parts of the city have been severed, and many activists are on the run, limiting the flow of information out of the city.