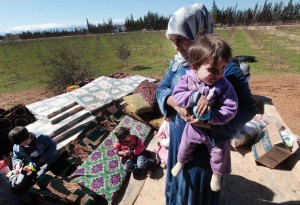 Qaa – Syrian refugees fleeing to neighbouring Lebanon on Monday said they feared they would be slaughtered in their own homes as government forces hunted down opponents in a brutal offensive against the opposition stronghold of Homs.

Activists accused the regime of trying to hide its crimes from the world as the military cracks down on an anti-government uprising that has raged for nearly a year.

With world pressure at a peak in the boiling crisis, the Syrian regime agreed to allow in two prominent international emissaries it had previously rebuffed – former UN Secretary-General Kofi Annan, the new special envoy to Syria, and UN humanitarian chief Valerie Amos.

Annan goes to Damascus on Saturday and Amos said she will arrive in the capital on Wednesday and leave on Friday.

Amos said the aim of the visit is “to urge all sides to allow unhindered access for humanitarian relief workers so they can evacuate the wounded and deliver essential supplies”.

The Obama administration added Syrian state television and radio to a US sanctions list part of an effort to block Syrian government assets within the US.

The Treasury Department’s sanctions chief Adam Szubin said the Syrian General Organization of Radio and TV has “served as an arm of the Syrian regime as it mounts increasingly barbaric attacks on its own population and seeks both to mask and legitimize its violence”.

He said any institutions supporting President Bashar Assad government’s “abhorrent behaviour will be targeted and cut off from the international financial system.”

The UN refugee agency said Monday that as many as 2 000 Syrians had crossed into Lebanon over the last two days. In the Lebanese border village of Qaa, families with women with small children came carrying only plastic bags filled with a few belongings.

“We fled the shelling and the strikes,” said Hassana Abu Firas. She came with two families who had fled government shelling of their town al-Qusair, about 22km away, on the other side of the Syrian border.

The town is in Homs province, where the government has been waging a brutal offensive for the past month.

“What are we supposed to do? People are sitting in their homes and they are hitting us with tanks,” Firas told The Associated Press. “Those who can flee, do. Those who can’t will die sitting down.”

Lebanese security officials say more than 10 000 Syrians are believed to be in the country. One official said as many as 3 000 are believed to have crossed in recent days because of violence in Homs, though it is unclear how many have returned to Syria.

The officials spoke on condition of anonymity under government protocol.

Inside Lebanon, many Syrians fear agents from their own country’s security services. Stories have circulated of kidnappings and collaboration between Lebanese and Syrian security forces. Syria controlled Lebanon for decades and Hezbollah, the party which now dominates Lebanon’s government, is closely allied with Syria and Iran.

Jordan has more than 80 000 Syrian refugees, according to the government.

The hardest-hit district of Homs is Baba Amr, an area that had been held by rebels for several months before regime forces drove them out on Thursday at the end of nearly four straight weeks of relentless shelling.

Although the government promised to let the Red Cross enter Baba Amr immediately, regime forces refused to let the humanitarian teams inside, citing security concerns. On Monday, the Red Cross said it had received new permission to enter, but the lockout continued.

Concerns were mounting over the humanitarian situation in Baba Amr. Activists alleged that after the Syrian forces seized back control of Baba Amr, they killed dozens of residents execution-style and burned homes in revenge attacks against those believed to be supporting the rebels. Civilians also were facing severe cold and hunger.

Activists say hundreds have been killed in the month-long Homs offensive and the UN recently put the death toll for a year of violence in Syria at 7 500. However, activists group say the toll has already surpassed 8 000.

Homs activist Mulham al-Jundi accused Syrian forces of keeping aid teams out of Baba Amr to hide their activities there. He said he heard a few explosions in the neighbourhood and saw columns of smoke there from a rooftop elsewhere in the city.

“We have heard explosions in Baba Amr, so it seems that they are destroying some of the houses and important centres there,” he said via Skype.

But after seizing Baba Amr from the rebels, regime forces appeared to be turning their attention to other rebellious areas, including the town of Rastan in Homs province and the northern province of Idlib, which borders Turkey.

The shift suggested that the Syrian military is unable to launch large operations simultaneously, even though the security services remain largely strong and loyal.

Assad, and his father who ruled before him, stacked key military posts with members of their minority Alawite sect – an offshoot of Shi’ite Islam – over the past 40 years, ensuring the loyalty of the armed forces by melding the fate of the army and the regime.

Still, there have been reports of steady defections from the mostly Sunni conscripts.

This is our land

Made up largely of defectors, the Free Syrian Army is perhaps the most potent armed force trying to topple the regime although they remain largely disparate around the country and do not hold any significant amount of territory.

In Idlib, Free Syrian Army fighters said they were on high alert after receiving information warning of tanks and heavy artillery being moved into position around the city.

“What happened in Homs is the act of the Assad army and nasty bandits,” Seif Al Hak, an FSA fighter, told the AP. “But God willing we are ready. If the Syrian Army tries to enter our city, we are in our rights.

“This is our land. We will defend our land, our country and we will not surrender until death and we will be martyrs.”

Some families have already fled Idlib; a truck overloaded with women and children left the city Sunday. In at least one area, the only movement on the streets was Free Syrian Army patrols.