Spike in Iran­ian lethal aid to Syrian regime ; US

U.S. officials say they see Iran’s hand in the increasingly brutal crackdown on opposition strongholds in Syria, including evidence of Iranian military and intelligence support for government troops accused of mass executions and other atrocities in the past week.

Three U.S. officials with access to intelligence reports from the region described a spike in Iran­ian-supplied arms and other aid for Syrian leader Bashar al-Assad at a time when the regime is mounting an unprecedented offensive to crush resistance in the key city of Homs.

“The aid from Iran is increasing, and is increasingly focused on lethal assistance,” said one of the officials, insisting on anonymity to discuss intelligence reports from the region.

The expanded Iranian role in the conflict has been underscored by reports — supported by U.S. intelligence findings — that an Iranian operative was recently wounded while working with Syrian security forces inside the country.

The flow of military aid to Assad comes as Arab states are considering arming the regime’s opponents, raising the risk of a wider conflict that U.S. officials fear could spread to neighboring countries.

In addition, the intelligence reports about rising Iranian support for Syria come as U.S. officials are seeking to rally international support for efforts to drive Assad from power without resorting to arming the rebels — a move the Obama administration has opposed. The portrayal offered by the three officials ­quoted in this article is more detailed than previously reported; such accounts are generally difficult to verify independently.

Iran has made no secret of its support for the Assad regime, though President Mahmoud Ahmadinejad has made repeated calls for a peaceful solution to the conflict, which began almost a year ago. 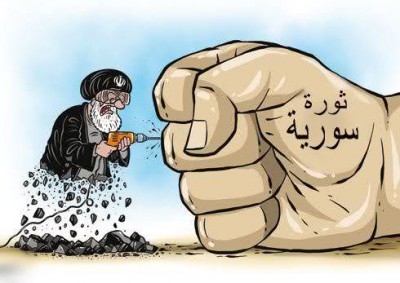 The U.S. intelligence assessments are in line with recent reports by Syrian rebels, who say Iran’s involvement in the crackdown has escalated. Opposition leaders, citing high-ranking defectors from the Syrian military, say Iran has dispatched hundreds of advisers, security officials and intelligence operatives to Syria, along with weapons, money and electronic surveillance equipment.

“Iran has been involved in the crackdown by Assad on a much larger scale than previously thought,” said Ammar Abdulhamid, a Washington-based Syrian activist and a member of the Syria Working Group of the Foundation for Defense of Democracies, a Washington think tank.

Stories of Syrian troops being accompanied by black-bearded men speaking a foreign language and assumed to be Iranian have circulated widely inside Syria for many months, but activists acknowledge they have little hard evidence that Iranians are actually participating in the offensives.

“We saw some evidence, but we can’t prove it,” said Omar Shakir, who fled to Lebanon from the former opposition stronghold of Bab Amr in Homs a week ago. “We have seen tall guys, big guys wearing black.”

The Free Syrian Army is holding seven Iranians captured in Homs in December. The Iranian government says they are power-plant workers, but the rebels assert that they were working for the Revolutionary Guard Corps. Eleven Iranian pilgrims abducted in January are still missing, Iran’s Press TV reported Saturday.

The belief that Shiite-dominated Iran is aiding the Syrian crackdown has helped sharpen sectarian sentiments among those in the mostly Sunni country seeking to topple the Assad regime, which is dominated by members of Assad’s minority Alawite sect, an offshoot of Shiite Islam.

There have also been widespread but unproven allegations that the Lebanese Shiite Hezbollah militia is aiding the crackdown. Sunni-dominated Arab states, such as Saudi Arabia and Qatar, have advocated arming the opposition.

U.S. officials declined to address allegations about specific acts. But one of the officials who spoke on the condition of anonymity said intelligence agencies have documented reports of a wide range of assistance.

A second senior U.S. official said members of Iran’s main intelligence service, the Ministry of Intelligence and Security, are assisting Syrian counterparts in charge of the crackdown. Last month, the Obama administration imposed sanctions against the intelligence service, citing “financial, material and technological support” for the Syrian crackdown. The Obama administration had previously imposed sanctions against Iran’s elite Quds Force for providing training and equipment to Syrian security units.

Iran’s intelligence service played a key role in Tehran’s crackdown on the country’s Green Movement in 2009 and is associated with allegations of sexual abuse, torture and mock executions of protesters.

It now is believed be “exporting its vicious practices to support the Syrian regime’s abhorrent crackdown on its own population,” said David S. Cohen, the Treasury Department’s undersecretary for terrorism and financial intelligence

The head of the Quds Force, Brig. Gen. Qassem Suleimani, also has paid at least one visit to Damascus in recent weeks, U.S. officials said.

Syrian Vice President Najah al-Attar, hosting a group of visiting journalists Saturday in Damascus, hailed the “importance of the historical relations between Syria and Iran.”

“Syria’s ties with Iran will remain strong, being built on a principled basis as they serve the two countries’ peoples and contribute to boosting stability in the Middle East,” she said, according to the official Syrian Arab News Agency.

Report of a mass execution

In the latest offensive, Syrian troops swept into the rebel enclave of Bab Amr late last week, routing opposition fighters. The move ended a 27-day siege on the Bab Amr neighborhood, which had been in the hands of opposition forces for weeks. Activists and human rights groups have since accused Syrian forces of waging a campaign of revenge on the neighborhood, executing captives, looting homes and systematically shelling hundreds of buildings.

The New York-based group Human Rights Watch said at least 700 people have been killed in weeks of fighting in the area.

Violence continued to rage across Syria on Saturday, with the opposition Local Coordination Committees reporting the deaths of 80 people nationwide. They included 47 soldiers said to have been shot in a mass execution after they tried to defect in the restive northern province of Idlib.

There were also reports of renewed shelling in several other neighborhoods of Homs where the Free Syrian Army holds sway.

The Syrian Arab News Agency reported that three people died in a suicide bombing in the southern province of Daraa. It also said 21 members of the security forces killed in the violence the previous day were given funerals.

The Syrian authorities continued to deny the International Committee of the Red Cross access to Bab Amr, two days after it was overrun by Syrian government forces in the wake of a retreat by the Free Syrian Army. An ICRC spokesman in Geneva told the Associated Press that the government was citing security concerns for its refusal to allow the aid group to enter.