Minister Ghazi Aridi said on Saturday that his Progressive Socialist Party “will boycott Monday’s parliamentary session if no agreement is reached” regarding the government’s extra-budgetary expenses before the session.

“We are against voting on [adopting a draft law on allocating $6 billion to the cabinet for extraordinary expenses in 2011 , and we might boycott the session if we did not reach a [compromise],” Public Works and Transportation minister Aridi told Future News TV.

He also said that his party would boycott the session “in order to give a chance for reaching an agreement” between March 8 and March 14 coalitions regarding the matter.

On February 23, most March 14 MPs walked out of the parliamentary session, which was expected to explore adopting a draft law on allocating $6 billion to the cabinet for extraordinary expenses in 2011.

Former PM Fouad Siniora said on Friday that the solution for settling this matter requires the parliament to “approve previous state budgets” of former governments.

PSP leader MP Walid Jumblatt had suggested settling the issue of legalizing the expenditures of past cabinets and those of the present government in one law.

Speaker Nabih Berri has snapped back at the March 14 coalition that urged him to find a comprehensive solution to the controversial extra-budgetary spending, saying the opposition should instead approve his proposal to form a joint ministerial-parliamentary committee to resolve the dispute with the March 8 forces.

In remarks published in several newspapers on Saturday, Berri said: “I improved the conditions of the success of my proposal so that it gets implemented.”

“I informed the ministers of the National Struggle Front and I hope that the other party (March 14) would cooperate with us to settle this issue,” the speaker added. 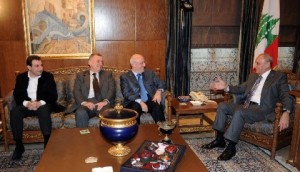 Berri met on Friday with three ministers loyal to the centrist NSF leader MP Walid Jumblat. Ministers Ghazi Aridi, Wael Abou Faour and Alaeddine Terro visited him to discuss ways to resolve the case ahead of a parliamentary session scheduled to be held on Monday.

Their visit came after several March 14 lawmakers, led by al-Mustaqbal parliamentary bloc leader Fouad Saniora, threatened to boycott the session if an urgent draft-law proposed by them to legalize extra-budgetary spending since 2006 isn’t discussed alongside a bill referred by the cabinet on the $5.9 billion spending made by Miqati’s cabinet in 2011.

The controversy lies on $11 billion spent by the governments of ex-PMs Saniora and Saad Hariri between 2006 and 2009. Another $5 billion was spent by Hariri’s national unity cabinet in 2010 given that Lebanon hasn’t had any state budget since 2005.

The March 8 forces and mainly MP Michel Aoun’s Change and Reform bloc are stressing that the $11 billion spending lacked the required documents and accounting of public finances and are pushing for the adoption of the $5.9 billion bill only.

In his remarks Saturday, Berri, whose Amal movement is part of the March 8 alliance, said “the draft-law proposed by the March 14 forces cannot be studied 48 hours before the session,” hinting that only the cabinet’s bill will be subject to approval in case March 8 was capable of garnering a majority.

Minister Abou Faour told As Safir newspaper, however, that the meeting of the NSF ministers with Berri was aimed at averting a division in the country and reaching a solution ahead of the session to avoid voting that would lead to major divisions.

The speaker is keen on resolving the deadlock because he is aware of the deep division among the March 8 and 14 MPs and knows its repercussions, he said.

Jumblat repeatedly announced that his MPs would not vote in favor of the $5.9 billion bill if the dispute is not resolved, dashing the hopes of the March 8 majority to garner support for the cabinet’s bill.

Ministerial sources close to Jumblat told An Nahar that Berri is keen on avoiding voting on the bill or reaching a stage of a boycott by March 14 MPs. “There is a possibility to reach a solution in the next couple of days,” they said.

According to the daily, Jumblat has told members of his bloc ahead of his visit to Paris on Friday that they should hold onto his call of finding a “comprehensive political solution to the spending issue.”