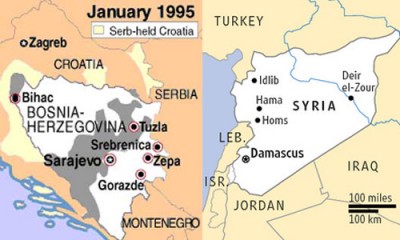 Few close observers of the Syrian conflict believe the uprising that began nearly a year ago is anything like over, and nor do they believe that President Bashar al-Assad can use the siege of Homs as a springboard to regain full control of the country.

Syrian troops entered the ruins of Baba Amro, the rebel enclave in Homs that succumbed to month of artillery and tank bombardment, amid loyalist claims that Assad had broken the back of a Western-sponsored terror campaign against his government.

Yet some experts believe the authorities’ brutality will lead to a drawn-out Bosnia-style war as well as the further militarization of a conflict that began as a civil uprising inspired by revolutions in Tunisia and Egypt.

“The Syrian regime has won one battle in a war it is not guaranteed to win,” said Nabil Boumonsef, a columnist at Beirut’s an-Nahar newspaper. “It took the Syrian forces one month of siege to enable them to enter Baba Amro district – this is not a sweeping military victory.”

“The opposition will continue. They will not rest or forgive or turn back,” Boumonsef said.

It was always clear that superior loyalist forces could overcome the lightly armed Free Syrian Army, made up of army defectors and rebels who have taken up arms. Human rights groups and activists say that between 700 and 1,000 civilians may have perished in Baba Amro, the worst single toll of the conflict.

“You would expect the regime after several weeks of heavy pounding to retake a small neighborhood like Baba Amro,” said Peter Harling, Syria specialist at the International Crisis Group. “This is not a turning point in the revolution; it is one more development. The rebels will try for heavier arms, and to obtain help from abroad.”

The regime’s unremitting use of force against Baba Amro – “flattening the neighborhood on its inhabitants” in the words of Sarah Leah Whitson, Middle East Director at Human Rights Watch – is unlikely to end the uprising but will likely further radicalize Syrian society.

“I don’t think the demonstration effect of wreaking the kind of havoc that they have in Baba Amro is necessarily going to kill off the uprising,” said Salman Shaikh at the Brookings Doha centre.

“The uprisings will be in hundreds of locations in the upcoming days. This is not just a fight with the Muslim Brotherhood or any one constituency, this is now a fight with the people of Syria.”

While the Assad narrative is that government forces are acting to protect local communities against armed gangs and Islamist terrorists, they are in fact inflicting collective punishments on areas that have supported the uprising.

“Take Baba Amro,” says Harling of the ICG: “What has the regime done for the civilians there? They made no serious effort to protect the people. They punished them collectively and this will further radicalize the people.”

Neither side is likely to change strategy. The government will use military might to force the opposition into submission and the Free Syrian Army, so far relying on smuggled weapons, will seek foreign sources of heavy weapons, funds and fighters.

One tactic the rebels might use is suicide bomb attacks against government symbols similar to those carried out by al-Qaeda in Iraq.

There are reports that Arab Islamist fighters joined rebels in Baba Amro and other strongholds and that more could arrive.

The Assads, for their part – in particular Maher al-Assad, Bashar’s younger brother and military enforcer – are seen as capable of committing another Homs or even a Hama, where forces loyal to Assad’s father Hafez and his brother Rifa’at, killed up to 20,000 people to crush an Islamist uprising in 1982.

“The son and the brother have done what the father and the uncle did in Hama. They are following a similar playbook. What demonstrative effect does this have on the protesters themselves? I don’t think they are going to be cowed,” Shaikh said.

“If people are treated this way, more and more will take up arms,” he said.

But despite the militarization of the conflict and the erosion of state authority, Assad retains the loyalty of the military, political and security establishment, and is unlikely to be overthrown in the short term.

“The conflict is transitioning into a civil war. Both the regime and the opposition have sufficient forces to sustain armed confrontation. Opposition groups are likely to grow stronger as Gulf states, primarily Qatar and Saudi Arabia, provide more arms and logistical support,” Shaikh said.

Defections from the army are likely to increase but there are no signs of a split in the military leadership, and the opposition remains divided and dysfunctional.

The Syrian National Council, the main opposition body, has not been able to provide strong leadership, devise a strategy to bring down the Assads, or set up a transitional administration for a post-Assad era.

Russian support – blocking condemnation at the UN Security Council and keeping arms flowing to Damascus – continues to signal to regime elites that Assad is still viable, decreasing the likelihood of splits, Ayham Kamel of Eurasia said.

But the number of loyal units Assad can depend on is limited to the 4th armored division and the republican guard, solidly Alawite and commanded by Maher al-Assad. The rest of the army is commanded by Alawites and loyalists but the rank and file is Sunni and the growing number of defections shows that the authorities cannot rely on them against Sunni opposition.

A political solution is seen as out of the question. Assad’s reforms so far have been criticized as superficial, inadequate and too late.

With Russia and China vetoing any Security Council resolution on Syria, the conflict could turn out to be protracted and grisly, like Bosnia, eventually sucking in the international community.

“I feel that we are going down a route where this conflict is going to take a hell of a long time. That will draw in the international community a lot more. That sounds to me a bit like Bosnia, which took a number of years to play out,” Shaikh said.

The conflict has already reignited historical animosity between Sunnis and Shi’ites, from which the Alawites derive, and is raising fears that Sunni Islamists will seize power, as they are in Tunisia, Egypt and Libya, eventually tipping the balance against Assad and his regional allies in Iran and Lebanon’s Shi’ite Hezbollah movement.

“There is no Syria after Assad,” said a Lebanese Shi’ite leader with strong ties to Damascus. “There is an established regime and an established leader, what is the alternative to Assad? We are heading to the unknown and the opposition is dysfunctional.”