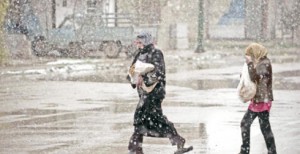 Up to 2,000 refugees fleeing violence in Syria are crossing the border into northern Lebanon, a spokesman for the United Nations refugee agency told Reuters on Sunday.

“Between one and two thousand (Syrians) are in the process of coming from Syria to Lebanon,” the UNHCR’s deputy representative in Lebanon Jean Paul Cavalieri told Reuters.

“Numbers will become clear in the coming hours. This is what we are hearing from our teams on the ground and local authorities.”

A Reuters witness on the Lebanese border heard heavy shelling coming from the nearby Syrian town of Qusair earlier on Sunday and saw mainly women and children fleeing towards Lebanon on foot.

Meanwhile, International Committee of the Red Cross spokesman Sean Maguire told NBC News the organisation was delivering aid around the Baba Amr district of Homs on Sunday, following days of delays, but not in the former rebel stronghold itself.

He said: “Negotiations to enter Baba Amr are ongoing and we still hope to enter that area today. This morning ICRC and Syrian Arab Red Crescent started distributing assistance in a village called Abel, less than two miles from Homs city. The plan is to continue to the neighborhoods of Al Insha’at and Al Tawzii in Homs to populations and to families displaced from Baba Amr.”

Earlier, the ICRC said it had been prevented from entering Baba Amr by Syrian ground forces despite receiving government permission, a move activists said was to prevent aid workers witnessing army “massacres”.

“We have the green light, we hope to enter, we hope today is the day,” said the ICRC’s Damascus-based spokesman Saleh Dabbakeh, declining to give further details about what he said were sensitive talks with Syrian officials.

“We are very concerned about the people in Baba Amr.”

After a month of bombardment by President Bashar al-Assad’s forces, concerns mounted for freezing, hungry and wounded civilians in Homs, which on Saturday had come under renewed shelling by government troops, anti-Assad activists said.

U.N. Secretary-General Ban Ki-moon said on Friday he had received “grisly reports” troops were executing and torturing people in Homs after insurgents abandoned their positions.

South of Homs, the border town of Qusair came under shelling by government troops, forcing residents to flee on foot to neighbouring Lebanon, a Reuters witness said.

“The people said they were sat at home and suddenly the shelling started and they fled. They said it was tank shelling and gunfire,” said Reuters reporter Afif Diab.

He spoke at the border to what he said were mainly women fleeing with their children. Blasts could be heard from the Lebanese border, which is some 7 miles from Qusair.

Other Lebanese border sources spoke of attacks in Syria by aircraft, but reports could not immediately be verified.

“Between 1,000 and 2,000 (Syrians) are in the process of coming from Syria to Lebanon,” the UNHCR’s deputy representative in Lebanon, Jean-Paul Cavalieri, told Reuters.

The United Nations says Syrian security forces have killed more than 7,500 civilians since the revolt against the Assad family’s four-decade rule began in March last year.

The Syrian government said in December that “armed terrorists” had killed more than 2,000 soldiers and police during the unrest.

Lebanon deployed more troops to its northern border in response to the violence in Syrian towns nearby, a Reuters witness said, part of a conflict that risks dragging in regional powers with rival sectarian interests.

In the Lebanese capital Beirut, hundreds of soldiers and scores of military trucks and jeeps blocked off the city centre on Sunday during protests for and against Assad, whose ruling clan are Alawites, an offshoot of Shi’ite Islam.

Lebanon is mainly made up of Shi’ites, Sunnis and Christians, and is home to the powerful Shi’ite militant group Hezbollah, which is backed by Shi’ite Iran.

Sunni Arab states Qatar and Saudi Arabia have been among the loudest calling for Assad’s downfall, and have even suggested arming his opponents.

“We sacrifice our blood and souls for you Bashar,” chanted a pro-Assad crowd of some 500 people. Some stepped on photos of Saudi Arabia’s King Abdullah and threw shoes at a poster of him.

A similar sized anti-Assad crowd sang: “We sacrifice our blood and souls for you, Homs.”

Former Syrian ally Turkey said Assad was guilty of “war crimes” while China said it was “deeply worrying that the situation in Syria remains grave”.