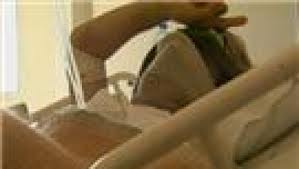 The rare personal accounts of the brutality by Syrian forces were provided at a Turkish hospital near the Syrian border where the three civilians are among many Syrians being treated for their wounds.

Ahmed Rahal, a 24-year-old farmer, said his left leg was shattered on Feb. 16, when a shell landed among about 6,000 people who were protesting in his village of Kafr Nboda against the regime of Syrian President Bashar Assad.

“I don’t remember how I got here,” Rahal said. “But I know I have to go back. My wife and 1-year-old son are still there.” He said at least 15 people were killed in the attack and more than two dozen wounded. He said his elderly parents were killed in their house by Syrian troops.

In the bed next to him at Kemal Ataturk University Hospital on the outskirts of Antakya was a heavily sedated man identified as Ahmed Abdul Wahab who had lost both his legs just below the knee.

Two Turkish policemen guarded the room. Journalists were given limited access to the patients and not allowed to take photos or videos.

Rahal’s face is pockmarked from fragments he blames on an exploding shell in his village. It doesn’t take long before the pain of his wounds, and memories of the violence, overwhelm him.

He speaks in partial sentences and clutches a sheet with his right hand. Soon Rahal covers his face with the sheet and starts crying. A Turkish policeman ushers a few visitors out of his room.

One floor below, Muhammad Ibrahim, 18, and Riad Ibrahim, 24, share a room at the hospital. They say they are not related and they were wounded by Syrian forces in separate areas.

“I was shouting anti-Assad slogans during a protest when a mortar landed,” said Muhammad Ibrahim, who identified himself as a popular singer in Kafr Nbuda in Hama province, not far from Homs, one of the hardest hit cities in Syria’s deadly violence.

What is left of Muhammad’s right leg is wrapped in bandages. His right arm is in a cast, and he urges visitors to come closer and speak louder. “I am deaf on the right ear,” he said.

Riad Ibrahim says he was wounded by a shell that hit his house in the village of Afetiya, also in the Hama region. He said the attack came at night when he was the only one home. “The following day more shells fell and a 12-year-old boy was killed,” Ibrahim said. “They shelled for no reason.”

Another hospital patient identified himself as Khalid Esheih, a member of the Free Syrian Army, the most potent armed opposition force in Syria. It is made up mostly of Syrian army defectors. Some of its members are based in the Idlib region of Syria near the Turkish border.

In an interview in a parking lot outside the hospital, Esheih, 24, said he left the army and joined the opposition force after seeing fellow soldiers kill women and children in rebel-held areas.

He said he is being treated for wounds he received last month during a fight Syrian forces launched in retaliation for an anti-regime protest that occurred in an area where Free Syrian Army fights were based.

“There were about 40 members of the FSA trying to defend the village,” he said. “But how can you defend against Assad?”