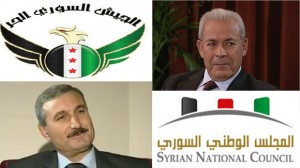 The leaders of the political and armed wings of Syria’s opposition appear to be at odds over the authority of a military council that was announced Thursday, underscoring divisions that are hampering efforts to lead an uprising.

Syrian National Council (SNC) leader Burhan Ghalioun said his political opposition group had formed a military body to oversee and organize armed rebels within the country under a unified leadership.

“The creation of the military council was agreed upon by all armed forces in Syria,” he told a news conference in Paris on Thursday. “We will be like a defense ministry.”

But only a few hours later, Free Syrian Army (FSA) chief Colonel Riad al-Asaad said that he has not been involved in the formation of a military council.

“I don’t know about the objectives of this body,” said Asaad, a figurehead for the collection of army deserters and civilians who have taken up arms.

“We want actions and not just talk,” he said, adding that he spoke with Ghalioun Wednesday night but that no agreement was finalized.

The two bodies, the SNC and FSA, have at times appeared at odds on strategy, with the Council initially reluctant to endorse the FSA’s military response to a government crackdown.

The SNC has been criticized by some Syrians for not overtly backing armed opposition to President Bashar al-Assad, which is being led by the Free Syrian Army.

Ghalioun said the pro-democracy movement which started a year ago had remained peaceful for months but due to the violent government response it had to create the military council.

Ghalioun aide Ausama Monajed told reporters the military body would bring all the factions fighting the Syrian government under one umbrella, evaluate their military needs and try to match them with offers of aid from abroad.

Monajed said several countries, including Saudi Arabia, have offered to provide weapons to the rebels.

“Arms are already being smuggled whether we like it or not, so our role is to organize the process and make sure weapons don’t fall into the wrong hands on the ground,” he said.

A prominent academic, Ghalioun has been advocating democracy in Syria since the 1970s, when Assad’s father was in power. But after months of bloodshed and internal squabbling among the opposition his ability to lead has been called into question.

Sunday, at least 20 prominent members of the 270-strong SNC formed a splinter organization called the Syrian Patriotic Group. They complained the SNC had failed to secure satisfactory results or to listen to the demands of the rebels inside Syria.