Are Libya’s friends better than Syria’s? 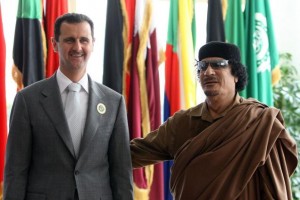 The Syrian uprising began nearly one year ago, when in March, thousands of pro-reform demonstrators took to the streets in Daraa to denounce the Assad regime. Since that time, thousands of civilians have been killed and the country has arguably descended into civil war.

Just a month before the streets of Daraa erupted, the world’s attention was on Benghazi. Libyans had also taken to the streets in similar fashion, who were likewise met with live ammunition by Muammar Qaddafi’s forces. The events in Benghazi escalated to civil war in their own right; however the end of hostilities there has already arrived.

The primary reason for the end of Libyan hostilities was the overwhelming support that opposition forces received from the international community. It only took two weeks from the time the Libyan people demanded change in their country for the world to begin its assistance, when it froze Qaddafi’s and his inner circle’s assets, limited their travel, and referred the lot to the International Criminal Court. In just the following month, the United Nations approved a resolution to enforce a no-fly zone, which included using “all necessary measures” to thwart attacks on the citizenry. The aforesaid resolution subsequently led to a new Libyan government, which was recognized by the United Nations, in just seven month’s time.

Meanwhile, across the Mediterranean, the Syrian uprising is entering its twelfth month and the disparity between the two revolutions is vast. Assad is still in power, and his efforts to quell the revolution in his country persist as unabated as scores of people are killed every day. However, it must be noted that the Syrian opposition, as did the Libyan counterpart, formed its own National Council of rebel organizations. They likewise have begun to encourage defections from the military and have shown the capacity to carry out sophisticated attacks against regime forces. But, where is the international community? Where is the no-fly zone? Where is the overabundance of Western air support, which comes along with Arab League backing?

The world’s inaction is due to a variety of reasons. First of which, is likely the lack of appetite for another infiltration, especially in a country like Syria, which enjoys both financial and military support from Iran, while maintaining significant trade relations with two United Nations Security Council members — Russia and China, who have acted as stumbling blocks toward the enforcement of any meaningful sanctions for a significant amount of time. Furthermore, Syria is one of the Arab League’s founding members. It may be for this reason that the regional body took its time building consensus for the modicum of action it has thus far taken. While finally, Bashar Assad has not been on the radar of the West for decades, like Col. Qaddafi, and therefore, they were not so opportunistic as to seize the opening for his ouster when it presented itself.

As a result, we will see the Syrian revolution play out much differently and it will likely be a continuation of the actions we have seen thus far. There will be increased draconian rhetoric from nations like the United States and Turkey who are looking to assert their influence in the region at this critical moment. These two nations will likely continue their efforts to provide minimal support to opposition activity; however, it will prove to be futile in the short-term. If there is to be real change in the coming weeks, it will likely come from a coalition of the willing.

The “Friends of Syria”, the 70-nation meeting which converged on Tunis to pressure the Untied Nations into action, proved to be complacent at best. So much so that another meeting of Syria’s so-called friends is scheduled for this month. But the fact remains that the meeting accomplished very little if anything at all, as the 70-nation meeting was missing two crucial components — Russia and China.

As was already learned, very little will be accomplished within the United Nations as long as either Russia or China continue to dangle their veto power in the face of the international body. As powers in the East continue to assert their will, it will force the hands of the West to act unilaterally, bypassing any desired international mandate.

What would result would have the look of a hybrid NATO-Arab League effort. Due to NATO’s previous involvement in Libya, it will not likely declare the alliance’s outright involvement in a new aerial campaign against an Arab nation. However, nations like the United States, Turkey and France will likely lead the military and humanitarian campaign with Arab League backing in the form of Qatar and Jordan, the latter of which has already established refugee camps on its borders, while the former continuously works behind the scenes to be the Middle East’s new power broker.

It appears that the only thing that may amount from the Friends of Syria meeting is a challenge to the status quo that is now the Syrian sectarian conflict. That said, the realization of such a status quo and the need to challenge it, may finally incite the necessary powers into action.

— The author is an intelligence manager at Max-Security Solutions, a geo-political risk consulting firm based in the Middle East.