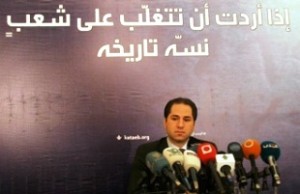 Phalange Party MP Sami Gemayel warned the government against approving the proposed history textbook that will be used in the Public School Curriculum because it failed to acknowledge the Cedar Revolution and other political phenomena in recent Lebanese history.

Gemayel said Tuesday during a press conference that any history textbook should be objective and impartial.

“History books tackle fundamental questions and any lack of objectivity and impartiality would compromise the Lebanese legacy of struggle.”

“Ignoring a large segment of the Lebanese population and the struggle of a large group of martyrs is a very serious issue,” Gemayel said.

“It is unacceptable that certain eras in history be abolished, for example the period between 1975 and 1976, during which hundreds of martyrs fell in defense of Lebanon,” Gemayel told a news conference.

“It is intolerable that the book speaks about one resistance. Selectivity here is a red line because we cannot forge a [viable] Lebanon while ignoring a segment of the Lebanese,” Gemayel cautioned.

“We warn that we will stage educational disobedience if the new book is approved by cabinet because we will not allow it to be used at schools.”

“Schools and teachers with close ties to us will be prevented from using the new history texbook in their classes,” the MP stressed

“The Lebanese generations do not know their own history and where they committed mistakes and made achievements,” he continued.

Gemayel gave the example of the Ottoman era in Lebanon, noting that some sides may consider the period as an occupation, while others don’t.

“This is where history comes in and we therefore call on the government to adopt a book that takes into consideration all points of views or at least recounts events objectively,” stressed the MP.

“A people without a history or past cannot build a future or learn from past mistakes,” he stated.

“We live in a diverse society and students should be given the opportunity to analyze events,” he added.

He also noted that some factions in Lebanon are not even mentioned in the history book, such as the Armenians.

“A million and a half Lebanese staged the 2005 Cedar Revolution and after a month and half intifada, they succeeded in ending the occupation on April 26, 2005,” Gemayel said

“Don’t the Lebanese have the right to remember this glorious development and name it as they like?” he asked.

“Objectivity in devising a new history book cannot be overlooked and if we want to build a future for ourselves, we have to recognize the other,” Gemayel stressed.

Controversy was sparked last month when it was revealed that the ministerial committee charged with developing the history curriculum had decided to omit the term “Cedar Revolution” when referring to the 2005 protests following the assassination of ex-Prime Minister Rafik Hariri.

Instead, the 2005 events will be described as “a wave of protests.” According to Culture Minister Gaby Layyoun, the reason for such terminology is the fact that the phrase “Cedar Revolution” was invented by a U.S. official.

“We cannot keep such a phrase in the curriculum … [It] is sensitive to many in the country and it might create problems between people,” Layyoun , who is a member of the the Free patriotic Movement whose leader MP Michel Aoun is closely allied with Hezbollah said last Sunday

Hezbollah MP Mohammad Fneish said on Wednesday that the proposed changes to the Lebanese history textbook help to shed light on South Lebanon and the Bekaa.

“We proposed amendments to the new history book to emphasize the role of the regions of South Lebanon and the Bekaa, as well as the importance of the Palestinian struggle,” Fneish told Al-Rai Kuwaiti newspaper.

The MP also denied “the presence of a Hezbollah delegate” in the committee charged with drafting a new history book.

A dispute has erupted concerning the newly proposed history book and the mentioning of the 2005 Cedar Revolution.