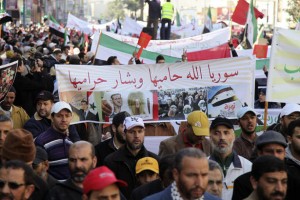 The U.S. and its allies dismissed the Syrian regime’s referendum on a new constitution Sunday as a “farce” meant to justify the bloody crackdown on dissent.

But voters in government strongholds suggested why some Syrians have not joined the uprising against President Bashar Assad: Loyalty, distrust of the opposition and fear his fall will ignite a civil war.

U.S. Secretary of State Hillary Rodham Clinton called the poll “a cynical ploy” and urged Syrians who still support Assad to turn against him. A “farce” and a “sham vote” was how German Foreign Minister Guido Westerwelle described it.

The new constitution allows — at least in theory — for the formation of competing political parties and limits the president to two seven-year terms. Such change was unthinkable a year ago. Syria has been ruled by the Baath party since it seized power in a coup in 1963 and the Assad family has ruled since Bashar’s father Hafez took over in another coup in 1970.

The opposition called the referendum an empty gesture. Supporters of the uprising say nothing short of Assad’s ouster will end the bloodshed.