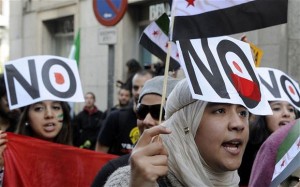 Over 89 per cent of Syrians approved a new constitution, proposed by President Bashar al-Assad, in a referendum on Sunday, state television said on Monday.

The new constitution that could keep Mr Assad in power until 2028 was condemned by world leaders as a “sham”.

“The referendum in Syria is nothing more than a farce,” said Guido Westerwelle, the German foreign minister. “Sham votes cannot be a contribution to a resolution of the crisis. Assad must finally end the violence and clear the way for a political transition.”

Turnout in the referendum was 57.4 percent, state television said.

The European Union earlier on Monday agreed new sanctions against Syria, including a freeze on assets of the country’s central bank, but has pulled back from targeting crucial Syrian mineral exports and commercial flights.

A meeting of EU foreign ministers on Monday agreed other new “restrictive measures” including a ban on cargo flight into the EU, the blacklisting of seven people close to Mr Assad and restrictions on trade in gold and precious metals.

Mr Sarkozy told French radio RTL on Monday that “we have the beginning of a solution” to evacuate Paul Conroy and Edith Bouvier, the British and French journalists trapped in Baba Amr neighborhood of the Syrian city of Homs.

The ban on Syrian cargo flights to the EU, has a loophole, if aircraft are carrying any passengers they will be given the all clear.

Britain and other countries had also urged a ban on phosphate imports from Syria, the country’s sixth largest exports industry with 40 per cent of trade accounted for by the EU.

But Greece which is one of the main buyers of Syrian phosphates in Europe, opposed the ban because it is facing a major slump and debt crisis.

Other countries, doing extensive business with Syria, argued against full sanctions against the Syrian central bank, fearing that the measures would halt all trade.

A proposal to ban commercial flights between Europe and Syria was dropped as it would complicate efforts to evacuate European citizens, such as the journalists caught up in Homs fighting.

The EU has already imposed oil and arms embargoes against Syria in response to a government suppression of dissent that has left more than 7,600 people dead, according to rights groups, since anti-regime protests erupted in March.

William Hague, the Foreign Secretary, called for more sanctions against Syria in the wake of continuing “appalling” violence.

The lack of a UN Security Council declaration has weakened international diplomatic efforts to end the violence, and Mr Hague warned Russia and China’s veto was seen as wrong “in the eyes of the world”.

He said new efforts to get a UN resolution would be taken up once morein New York later this week.

EU foreign ministers will also endorse Friday’s Tunis statement calling on the Syrian leader to step down and urging the setting up of a UN peacekeeping force.

Mr Hague dismissed Sunday’s Syrian “referendum” as of no relevance to international efforts to impose a “diplomatic and economic stranglehold on the Assad regime” to “choke off support for its campaign of terror”.

But the Foreign Secretary is against arming the Syrian opposition.

On Monday, he welcomed the Arab League’s support and its readiness to join peacekeeping efforts, but pointed out: “For that to work, there has to be a peace to keep.”

The trapped journalists, Conroy and Bouvier were wounded in a government attack on a makeshift media centre on Wednesday.

Mr Sarkozy said “it seems that things are starting to get unblocked” after days of failed attempts to evacuate the wounded reporters and the bodies of the dead. He did not provide details.