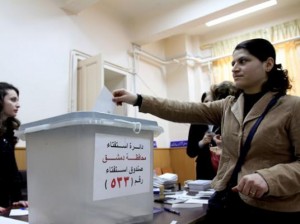 At least 31 Syrian civilians and soldiers were killed on Sunday in bloodshed that coincided with a vote on a new constitution that could keep President Bashar al-Assad in power until 2028.

The Syrian Observatory for Human Rights said a military bombardment of opposition districts in Homs, now in its fourth week, had killed nine civilians, while rebel fighters had killed four soldiers in clashes in the city.

The British-based Observatory said eight civilians and 10 members of the security forces were killed in violence elsewhere in Syria, scene of what has become an increasingly militarized revolt against four decades of Assad family rule.

Voting was under way in the referendum on a constitution which Assad says will lead to a multi-party parliamentary election in three months, but which his opponents see as a sick joke given the unrest convulsing the country.

“What should we be voting for, whether to die by bombardment or by bullets? This is the only choice we have,” said Waleed Fares, an activist in the Khalidiyah district of Homs.

“We have been trapped in our houses for 23 days. We cannot go out, except into some alleys. Markets, schools and government buildings are closed, and there is very little movement on the streets because of snipers,” he said.

“Baba Amro has had no food or water for three days,” Fares said of another besieged and battered district in the city. “Homs in general has no electricity for 18 hours a day.”

He said people in opposition areas of Homs had wanted to burn copies of the new constitution in protest at the referendum, but it was too dangerous to venture out of doors.

On Saturday security forces killed at least 100 people across Syria, including six women and 10 children, the opposition Syrian Network for Human Rights said.

The Syrian government, backed by Russia, China and Iran, and undeterred by Western and Arab pressure to halt the carnage, says it is fighting foreign-backed “armed terrorist groups.”

The outside world has been powerless to restrain Assad’s drive to crush the 11-month-old revolt, which has the potential to slide into a sectarian conflict between Syria’s Sunni Muslim majority and the president’s minority Alawite sect.

The military onslaught on parts of Homs has created harrowing conditions for civilians, rebels and journalists.

A video posted by activists on YouTube showed Mohammad al-Mohammad, a doctor at a makeshift clinic in Baba Amro, holding a 15-year-old boy hit in the neck by shrapnel and spitting blood.

“It is late at night and Baba Amro is still being bombarded. We can do nothing for this boy,” said the doctor, who has also been treating Western journalists wounded in the city.

American correspondent Marie Colvin and French photographer Remi Ochlik were killed in the bombardment of Homs last week and two other Western journalists were wounded. The group is still trapped there despite Red Cross efforts to extract them.

The International Committee of the Red Cross (ICRC) said it was still unable to evacuate distressed civilians from Baba Amro. After a day of talks with Syrian authorities and opposition fighters, it said there were “no concrete results.”

“We continue our negotiations, hoping that tomorrow (Sunday) we will be able to enter Baba Amro to carry out our life-saving operations,” spokesman Hicham Hassan said in Geneva.

Despite the violence in provincial cities across Syria, voting on the constitution went ahead in calmer areas.

If approved, it would drop an article making Assad’s Baath party the leader of state and society, allow political pluralism and enact a presidential limit of two seven-year terms.

But the limit will not be enforced retrospectively, meaning that Assad, already in power for 11 years, could serve another two terms after his current one expires in 2014.

Dozens of people lined up to vote in two polling stations visited by a Reuters journalist in Damascus. “I’ve come to vote for President Bashar, God protect him and give him victory over his enemies,” said Samah Turkmani, in his 50s.

Bassam Haddad, the director of one polling centre, said: “From the beginning the voting has been much better than we expected. We can say 200 percent above expectations.”

Another voter, Majed Elias, said: “This is a national duty, whether I agree or not, I have to come and vote… I agree with the draft constitution, even if I object to some parts. Every Syrian must ride the wave of reform to achieve what he wants.”

Anti-Assad activists have called for a boycott of a vote they see as meaningless. They said they would try to hold protests near polling stations in Damascus and suburbs where troops drove out insurgents last month.

Some said security forces had stopped people venturing out to buy food in Homs on Saturday, confiscated their Interior Ministry-issued identification cards and informed them the cards could be retrieved at specified polling centers the next day.

“They want to force people to vote in this doctored, so-called referendum,” activist Mohammad al-Homsi said from Homs.

This is Syria’s third referendum since Assad inherited power from his late father. The first installed him as president in 2000 with an official 97.29 percent ‘yes’ vote. The second renewed his term seven years later with 97.62 percent in favour.