Opinion: How to bring down Assad

by yalibnan
595
At the end of a week when more brave reporters died chronicling Syrian President Bashar al-Assad’s slaughter of his countrymen, you hear passionate calls for sending weapons to the “Free Syrian Army.”
Share: 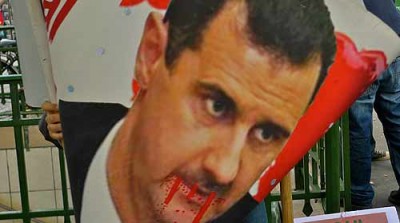 At the end of a week when more brave reporters died chronicling Syrian President Bashar al-Assad’s slaughter of more than 6,000 of his countrymen, you hear passionate calls for sending weapons to the embattled opposition militia known as the “Free Syrian Army.”

More weapons undoubtedly will flow to the opposition, one way or another, but they’re not going to bring about a democratic Syria. The moral case for arming the rebels may be strong, but it doesn’t overcome the practical problem: The battlefield is Assad’s strength, not weakness.

A better route to democratic change in Syria is the mix of economic, diplomatic and other pressure discussed at Friday’s “Friends of Syria” meeting in Tunis, which also urged a cease-fire. A covert supply of weapons is likely to keep the opposition from being overrun, but both Turkey and the United States oppose any move toward outside military intervention or open support of rebel fighters.

“The only thing that’s accurate in ‘Free Syrian Army’ is that they’re Syrian,” cautions one skeptical administration official. “They’re not going to free Syria, and they’re not an army.” That may sound harsh, but shoveling weapons to this disorganized opposition now is likely only to increase civilian deaths. The insurgents are too dispersed, disorganized and untrained to be an effective national force.

The right Syria strategy should address Assad’s key vulnerabilities, which are not military. The first is money, without which the regime can’t survive. The second is sectarian tension, which Assad fosters because it boosts his claim to be protector of the minority Alawite and Christian communities.

Let’s look at these two pressure points and think how the United States could help remove the pins on which Assad rests.

First, money: Assad’s regime survives because it has enough cash to pay the army, sustain the economy despite sanctions and grease the palms of thousands of henchmen. The United States recognized this vulnerability when it imposed economic sanctions in August, which were followed by similar moves by the European Union, the Arab League and Turkey.

But the Syrian cash machine continues to operate. Despite sanctions, the Central Bank’s reserves still total about $10 billion, or about six months of imports, according to U.S. estimates. That’s down from about $18 billion before the conflict exploded a year ago — a fall but not yet a crippling one.

The Syrians survive partly by piggybacking on the thriving Lebanese banking system. Obama administration emissaries sharply warned the Lebanese government in November that it can’t play both sides of the street; if Lebanese banks are caught providing more back-door aid to Damascus, the consequences for the Beirut financial system could be severe, a Treasury official said.

A more worrisome problem is Russia, which is providing money for Assad’s regime as well as diplomatic cover. U.S. officials hope that when the European Union bans dealings with the Syrian Central Bank this week, that will make it harder for Russia to channel aid. Certainly more sanctions will help, but not if Russia is determined to keep Assad afloat.

Rather than attacking Russian behavior as “despicable,” as Secretary of State Hillary Rodham Clinton did Friday in Tunis, a better answer is to make Moscow part of the solution. That might mean giving Russian leader Vladimir Putin a role in brokering the transition — hosting a conference in Moscow, let’s say, that brings together the Syrian opposition, the Arab League and the Turks. If that got Assad out of the way short of a civil war, it might be a sensible bit of realpolitik.

Second, the issue of sectarian tension: Assad survives in part because Alawites and Christians fear that a bloodbath of reprisal killings would follow his ouster. The United States and its key regional allies, Turkey and Saudi Arabia, need to address this issue directly. The message should be that Assad’s days are indeed numbered, and minorities should join Sunnis in the movement for democratic change — with the assurance that, as they do so, they will be protected by international guarantees.

The Muslim Brotherhood, which has emerged as the strongest voice in the Arab Spring, would win new friends if it could join Turkey in sponsoring a dialogue that gathers Syria’s Alawite clan leaders, Christian patriarchs and Muslim democrats.

The world has been inspired by the courage of the Syrian people, and of journalists such as Marie Colvin of the London Sunday Times and Anthony Shadid of the New York Times, who died while reporting the resistance to Assad’s tanks and artillery. But precisely because so many lives are at risk, the United States and its allies should craft a process that brings democratic change, not mayhem.