'Friends of Syria' call for immediate end to all violence 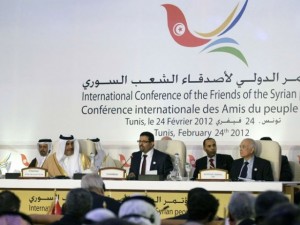 TUNIS: Arab and Western nations in Tunisia for the first “Friends of Syria” meeting on Friday called for an immediate end to violence in the country and for new sanctions on the regime of President Bashar al-Assad.

In a final declaration, the group called for the regime to immediately end all violence to allow for humanitarian aid to be brought in.

“The Friends’ Group called on the Syrian government immediately to cease all violence and to allow free and unimpeded access by the UN and humanitarian agencies,” it said.

“It demanded that the Syrian regime immediately permit humanitarian agencies to deliver vital relief goods and services to civilians affected by the violence,” it said.

It also vowed to “press the Syrian regime to stop all acts of violence” by enforcing current sanctions and introducing new ones, including with travel bans, asset freezes, ceasing oil purchases, reducing diplomatic ties and preventing the shipment of arms.

“Participants committed to take steps to apply and enforce restrictions and sanctions on the regime and its supporters as a clear message to the Syrian regime that it cannot attack civilians with impunity,” it said.

The communique though, did not mention any foreign military intervention along the lines of the NATO bombing campaign that helped force out Libya’s Muammar Gaddafi.

Instead, it called for further diplomatic pressure on Assad to step down and endorsed an Arab League plan that sees him handing power to a deputy as a prelude to elections.

The declaration did not fully endorse some Arab calls for peacekeepers to be deployed to Syria, with the declaration saying only that it “noted the Arab League’s request to the United Nations Security Council to issue a resolution to form a joint Arab-UN peacekeeping force”.

But the wording of the Tunis draft reflected a harsh reality: there is little the world can do to stop the violence as long as Russia and China, both of which declined invitations to the Tunis meeting, reject Security Council resolutions.

The head of the main opposition Syrian National Council (SNC) expressed disappointment in the Tunis meeting. “This conference does not meet the aspirations of the Syrian people,” SNC chief Burhan Ghalioun told Reuters.

But in a sign the international community is seeking ways around the Security Council deadlock, UN Secretary General Ban Ki-moon said he would dispatch former UN chief Kofi Annan to Syria as a joint UN-Arab League envoy.

“If the Assad regime refuses to allow this life-saving aid to reach civilians, it will have even more blood on its hands,” Clinton said in prepared remarks for the meeting. “So too will those nations that continue to protect and arm the regime”.