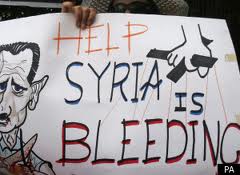 The “Friends of Syria” gather tomorrow in Tunisia to seek ways to oust President Bashar al- Assad, who has dug in with increasing violence against civilian opponents after two failed UN Security Council measures.

Hanging over the Tunis meeting, which is drawing foreign ministers and other officials from about 80 nations, is the sustained bombardment of Homs, Syria’s third-largest city where two journalists were among the fatalities from regime mortar and artillery fire. In a report just hours before her death Feb. 21, American Marie Colvin of Britain’s Sunday Times said what she had seen of the regime’s brutality was “absolutely sickening.”

“No one here can understand how the international community can let this happen,” Colvin told the BBC in a telephone interview. After witnessing the death of a two-year- old baby, hit by shrapnel, in a makeshift clinic set up in an apartment, she said. “This is happening over and over.”

In London, U.K Foreign Secretary William Hague said Colvin and French photojournalist Remi Ochlik “died bringing us the truth about what is happening to the people of Homs.” Governments around the world “have the responsibility to act upon that truth –- and to redouble our efforts to stop the Assad regime’s despicable campaign of terror,” Hague said in an e- mailed statement yesterday.

That’s the goal of the Tunis gathering, the first meeting of the so-called Friends group set up in the aftermath of setbacks at the UN Security Council.

U.S. Secretary of State Hillary Clinton is scheduled to join other foreign ministers and representatives of international organizations to seek options to help the Syrian opposition and to counter an image of collective ineffectiveness against a regime sheltered by two Russian and Chinese vetoes of Security Council resolutions calling on Assad to step down. Russia announced it isn’t attending the meeting.

The countries come to Tunis with differing agendas. Some, such as the U.S., would rather not see the conflict become more militarized, while Qatar has suggested arming the opposition. France floated the idea of establishing a humanitarian aid corridor, which was quickly rebuffed by the U.S. and others as unworkable.

Planning for the “Friends” meeting will continue today in London, where foreign ministers gathered to discuss Somalia planned a side meeting to prepare for the Tunis talks.

With Syria’s large weapons stockpiles, and the potential for violence to keep getting worse and destabilize neighbors, the stakes are high for the meeting, analysts such as Joshua Landis said.

“These nations are coming together as a group, but they’re doing it in part out of fear,” said Landis, director of the Middle East Studies program at the University of Oklahoma in Norman. “The risk of getting nothing done is very high.”

The “fear” is that without coordination, the fractured opposition will be armed in a haphazard way, with different regional, ethnic and religious actors supporting different militias and ideological currents within Syria, leading to civil war.

Under a barrage of international criticism, Russia is showing signs of backing away from its steadfast defense of Syria, a Soviet-era ally to which it sells weapons. Saudi Arabia’s King Abdullah chastised Russian President Dmitry Medvedev yesterday over the phone for his country’s Feb. 6 veto, according to the official Saudi Press Agency.

In recent days, Moscow officials have come out publicly in support of humanitarian aid to Syria, including a two-hour daily truce proposed by the International Committee of the Red Cross, as well as a UN special envoy to the Middle Eastern country.

Noting that shift in position, European diplomats at the UN want to return to the Security Council for a third time soon after the meeting in Tunis, according to a Western diplomat at the UN who spoke on condition of anonymity because plans haven’t been made final.

Any new draft resolution must endorse the Arab League plan for a political transition and can’t equate the violence unleashed by Assad’s security forces with that of opposition members defending themselves, the diplomat said.

The UN estimates that Assad’s crackdown killed 5,400 last year while Saudi Arabia says the death toll is at least 7,000. Humanitarian and activist groups say hundreds more have died in the weeks since that estimate.

Looming over the Tunis gathering is how to support the opposition amid a narrowing menu of options.

Some nations, such as Qatar, seem open to the possibility of arming insurgents, and the U.S. has signaled it may soften its opposition. White House press secretary Jay Carney told reporters that the administration doesn’t “rule out additional measures if the international community should wait too long” to take needed actions.

“Right now, there is no change, but we’re looking at potential options,” Andrew Shapiro, the U.S. assistant secretary of state for political-military affairs, said in an interview yesterday in Bloomberg’s Washington office.

Both the U.S. and EU want tighter sanctions on Syria. The 27-nation EU is considering a freeze on central bank assets and a ban on imports of phosphates and precious metals, an EU official told reporters in Brussels on Feb. 8 on condition of anonymity. The Arab League already has suspended Syria and imposed economic sanctions against it.

Agreeing on sanctions may be the easy part.

French Foreign Minister Alain Juppe raised on Feb. 15 the idea of opening humanitarian corridors. France was at the forefront of the international effort to arm and eventually provide NATO air cover for Libyan rebels, a situation Russia and China don’t want to see repeated.

The French suggestion was swiftly rejected by Western allies as impractical and difficult to implement without troops on the ground. The aid group Doctors Without Borders said it would “militarize medical aid and make it a target.”

The French idea is just a fancy word for “air cover,” Steven Heydemann, a senior adviser on the Middle East at the U.S. Institute of Peace, a Washington-based non-partisan policy group funded by Congress, said in a phone interview.

For the U.S., the prospect of getting involved in another Middle Eastern conflict in an election year is especially unpalatable, said an administration official who spoke on condition of anonymity because he wasn’t authorized to talk to the media. On the heels of wars in Iraq and Afghanistan, the U.S. will resist military involvement that could end in a situation that the U.S. would have to stay and preside over, he said.

Even with the divisions within the “Friends” group, the effort of getting together provides a chance for coordination.

“What happens in Syria has repercussions beyond its borders, which is why a peaceful resolution has to be explored,” Robert Danin, a senior fellow at the Council on Foreign Relations in Washington, said in a phone interview. “That takes high-level diplomacy and up until now, we haven’t had that.”