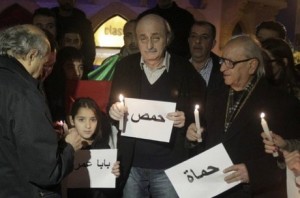 During a demonstration on Wednesday in support of the the Syrian people, Progressive Socialist party leader leader MP Walid Jumblatt declared his support for the Syrian revolution.

Jumblatt said: “Libya, Tunisia, and Egypt prevailed, and we are a part of this Arab Spring and the Syrian people’s revolution will prevail.”

According to New TV , in addition to Jumblatt, the Minister of social affairs Wael Abou Faour, and MP Akram Chehayeb participated along with members of al-Mustaqbal and March 14 forces in a demonstration in solidarity with the Syrian people.

The demonstration took place at the garden of Samir Kassir square in downtown Beirut.

Al-Jadeed also reported that a “counter demonstration supporting the Syrian regime took place in Downtown Beirut, prompting the security forces to separate between the two demonstrations in order to prevent any clashes.”

Jumblatt on Monday had described the regime’s promise of reform as a “joke”, slamming major powers’ support for this “charade” where it has supplied the regime with arms, intelligence, and naval vessels.