It is official, Nahhas resigned, updates 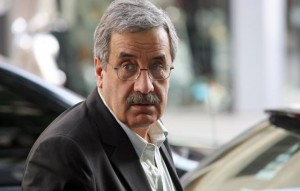 This development comes after Nahhas submitted on Tuesday his resignation from the cabinet to Change and Reform bloc leader MP Michel Aoun.

Prime Minister Mikati insisted that Nahhas should sign the decree linked to a cabinet decision that was approved by the majority of the ministers in January in order to kick start the cabinet sessions. He also stresses that the labor minister’s approval of the decree is the only solution to the crisis.

The transportation allowance decree is at the center of a dispute between Mikati and Nahhas, who refuses to sign the decision for allegedly being “illegal.”

Al-Mustaqbal newspaper reported on Monday that Hezbollah informed Mikati on Sunday that its” secretary general Sayyed Hassan Nasrallah expects Nahhas to sign the decree one day before the parliamentary session is held.”

Aoun said during an interview with New TV on February 13 that Nahhas “will not leave the government.”

On the other hand Nahhas said on February 12 that he ““will not sign the transportation allowance decree even if all the 29 ministers voted against him , not only the two-thirds of the cabinet.”

“Whoever is able to oust me then let him do so,” Nahhas told New TV.

“Mikati received Bassil at 9:00 p.m. at his residence in Verdun and received Nahhas’ resignation from the cabinet. After consultations between Mikati and President Michel Suleiman, it was agreed to accept the resignation,” the report said.