Military intervention may be only solution in Syria: SNC 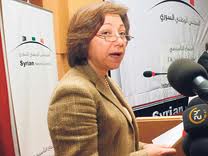 The opposition Syrian National Council (SNC) said on Wednesday it was coming to the view that military intervention was the only solution to the nearly year-old crisis that has killed thousands in Syria.

Kodmani said the SNC was also proposing that Russia, which has vetoed action against the Syrian government in the U.N. Security Council, help persuade Damascus to guarantee safe passage to humanitarian convoys ferrying aid to civilians.

“In order to not militarize, the idea is to ask Russia to exert pressure on the regime not to target humanitarian corridors,” she said. Kodmani said the SNC proposed setting up corridors from Lebanon to the besieged city of Homs, from Turkey to Idlib and from Jordan to Deraa.

The SNC will also urge Egypt, at a Friends of Syria meeting due to be held in Tunis on Friday, to restrict access to the Suez Canal to any ships carrying weapons to the Syrian regime.

Russia: No to humanitarian corridors

A top official said Russia was not backing a call by France to set up actual humanitarian corridors for delivering assistance to flashpoints such as Homs because these would require support from foreign troops.

“This would require special mechanism and forces, and logically speaking, this could lead to the use of force, should things go wrong.”

He said the idea backed by Moscow and the ICRC was to ensure “a humanitarian pause — not humanitarian corridors.”

“Dmitry Medvedev and King Abdullah exchanged views about the situation in the Middle East in the light of the events in Syria,” the Kremlin said without providing further details.

Gatilov said Russia was growing increasing concerned by reports that the armed opposition groups were receiving military assistance from abroad.

“That the armed opposition is receiving support is a well-established fact,” he told reporters.

“The shipments that cross the border from Lebanon…. support the armed opposition. We feel this only feeds and escalates the situation.”

Russia has emerged as Syrian President Bashar al-Assad’s closest international ally and its support for a truce puts pressure on the regime to open the border to foreign supplies.

But Russia has refused to single out Assad for criticism and on Wednesday again called on both his forces and the armed opposition to end the violence.