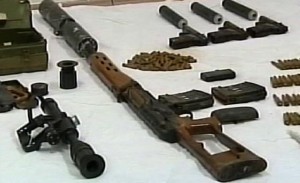 Police in Azerbaijan have arrested an unspecified number of people linked to Iran and to Lebanese militant group Hezbollah suspected of planning attacks in the country, state television said Tuesday.

The report said the suspects had gathered intelligence on targets and bought explosives, guns and ammunition, but gave no further details.

A suspected Iranian bomber had his legs blown off as he hurled a grenade at Thai police. Israel blamed Iran for the attacks which came at a time of heightened tensions over Tehran’s nuclear program.

A senior Israeli official involved in counter-terrorism warned on Friday that Iran and Hezbollah were planning to carry out new anti-Israeli attacks around the world after the incidents in India, Thailand and Georgia.

The allegations infuriated Tehran, which sent a diplomatic note of protest accusing Baku of collaborating with Israel’s spy services and helping assassins who have killed Iranian nuclear scientists.

Baku responded with a letter to Tehran calling the claim “absurd, unsubstantiated and false”, according to Azerbaijani media reports on Tuesday.

Tehran has been angered by Baku’s friendly links with Israel, while Azerbaijan has accused Iran of sponsoring Islamic radicals on its territory.

Relations between the ex-Soviet state and the Islamic republic are complicated by the presence of a huge ethnic Azeri minority in Iran, which far outnumbers Azerbaijan’s own population of 9.2 million.