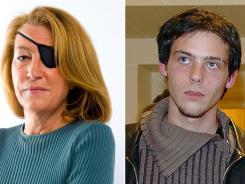 A French photojournalist and an American working for a British newspaper were killed Wednesday by Syrian government shelling of the opposition stronghold of Homs, France’s government said.

Activists said at least two other Western journalists were injured in barrages that claimed at least 19 lives.

The Syrian military has redoubled its attacks on Homs in the past few days, aiming to retake neighborhoods that have come under control of the opposition and armed rebels — many of them military defectors. The seizure of territory and nearly daily clashes between the rebels and regime forces have pushed Syria to the brink of all-out civil war.

The Obama administration opened the door slightly Tuesday to international military assistance for Syria’s rebels, with officials saying new tactics may have to be explored if President Bashar Assad continues to defy pressure to halt a brutal crackdown on dissenters that has raged for 11 months and killed thousands.

The White House and State Department said they still hope for a political solution. But faced with the daily onslaught by the Assad regime against Syrian civilians, officials dropped the administration’s previous strident opposition to arming anti-regime forces. It remained unclear, though, what, if any, role the U.S. might play in providing such aid.

A Homs-based activist, Omar Shaker, also said two other Western journalists were wounded. including a photographer for the Sunday Times and a Spanish reporter.

There was no immediate comment from the Sunday Times or Ochlik’s photo agency.

He said the journalists were killed when several rockets hit a garden of a house used by activists and journalists in the besieged Homs neighborhood of Baba Amr, which has come under weeks of heavy bombardment by forces from Assad’s regime. At least 19 people were killed in Wednesday’s shelling, including the journalists, activists said.

Shaker said the bodies were taken to a makeshift hospital in Baba Amr.

The U.N. estimates that 5,400 people have been killed in repression by the regime of President Bashar Assad against a popular uprising that began 11 months ago. Syrian activists, however, put the death toll at more than 7,300.

He added that intense Syrian troops shelling with tanks and artilleries began at 6:30 a.m. and was continuing hours later. He said the apartment used by journalists was hit around 10 a.m.

An amateur video posted online by activist showed what they claimed were bodies of two people in the middle of a heavily damaged house. It said they were of the journalists. One of the dead was wearing what appeared to be a flak jacket.

In Geneva, the International Red Cross said it was holding talks with members of the opposition Syrian National Council. The ICRC called Tuesday for a daily two-hour halt to fighting in Syria so it can bring emergency aid to affected areas and evacuate the wounded and sick.

Head of ICRI operations for the Middle East, Beatrice Megevand-Roggo, told The Associated Press on Tuesday that the ICRC had almost no contacts with opposition figures inside Syria.

The journalists’ deaths came a day after a Syrian sniper shot dead Rami al-Sayyed, a prominent activist in Baba Amr who was famous for posting online videos, Shaker and the Local Coordination Committees activist group said.

On Jan. 11, award-winning French TV reporter Gilles Jacquier was killed in Homs. The 43-year-old correspondent for France-2 Television was the first Western journalist to die since the uprising began in March. Syrian authorities have said he was killed in a grenade attack carried out by opposition forces — a claim questioned by the French government, human rights groups and the Syrian opposition.

Last week, New York Times correspondent Anthony Shadid died of an apparent asthma attack in Syria after he snuck in to cover the conflict.