Syrian widow: What is the world waiting for? 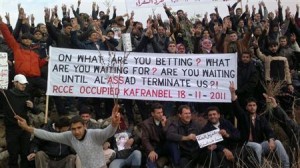 Editor’s note: CNN correspondent Arwa Damon reported from Baba Amr, a neighborhood in Homs, Syria, a city that has been a flashpoint in a months-long uprising against President Bashar al-Assad. Government forces have shelled parts of the city – especially Baba Amr, a bastion of anti-government sentiment –for two weeks, damaging houses and other buildings and leaving many dead and wounded.

Damon is one of the few international reporters in Syria, whose government has been placing restrictions on journalists and refusing many of them entry. Below is an edited account of what Damon and her team saw and heard from activists in Homs:

This small hall was once filled with laughter. Marriages took place here. Now the echoing sounds are not of joy, but of tragedy.

Often they huddle in near darkness.

Some cover their faces, still afraid of the government’s relentless shelling. They are afraid, they said, they might lose more than they already have. Conditions here are desperate

In hard-hit Baba Amr, about 350 people who’ve fled their homes out of fear or necessity are living in this makeshift bunker.

Restricted by seemingly constant shelling and gunfire outside, they don’t have any medicine, let alone the ability to get to a hospital. Children are getting sick, and one woman recently gave birth there. They have little food – some lentils and rice and a little bread.

They fled here either because their homes were destroyed by shelling, or because the firing was getting too close.

Just about everyone in the bunker says they’ve either lost a loved one to the violence, or have a loved one who has been detained.

One woman’s son has been detained since the end of august, another woman’s son, this one right here for a month and a half.

We just walked in here and we’ve been swamped, bombarded by these people’s tragic stories here.

Most of them survive on basic staples of rice and lentils taken from a government warehouse nearby, but supplies are running low.

The room is one filled with endless stories of both death and despair.

Safa’as brother and husband were killed when a round struck their home 10 days ago. She can hardly pause to grieve or really comprehend what has happened.

“I have to keep going, I have to live for my children,” she says.

The activists take a moment to gather for our camera. All they want is to tell their stories.

“My husband died on the first day of the bombing, they didn’t let me see his body, it was shredded to pieces, “Umm Khidir recalls.”His blood is still in the streets and feel his son, he’s sick and there is no medicine.