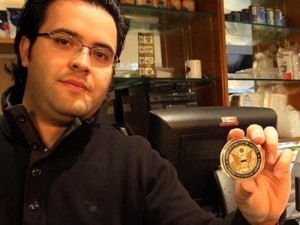 An FBI agent accidentally lost classified file on Barack Obama at the counter of a Lebanese restaurant in Cannes, France during the G20 summit last November, manager of the restaurant found it and and returned it to the FBI.

An unpleasant incident took place during November’s G20 summit in Cannes, France last year. French journalists at the daily Nice Matin recently revealed that an even more dramatic mistake happened the day before when an American FBI agent left a confidential file on the US President Barack Obama’s visit at the counter of a local Lebanese restaurant.

“It was a really normal-looking binder,” said Bilal Herche, the manager of the restaurant “Al Charq”. “I opened it to see then that I understood instantly that it was something crazy.” The file contained a detailed plan of the 5th floor of the Carlton Hotel, where the American president was supposed to stay during the G20. It also included details on each of his routes, starting with his arrival at the Nice Airport all the way up to his departure.

Unsure what to do next, the honest  restaurant manager finally found the telephone number for the FBI on the internet. He called and finally managed to convince the agent on the other side of the Atlantic that he was telling the truth by reading the first page of the binder.

As soon as he finished reading,  Herche said the American agent’s response was immediate: “Don’t move. We’re on our way.” The young man didn’t even need to give the FBI his address. They had already traced his cell phone and two agents arrived in his restaurant minutes later.

Upon reading the file, one couldn’t keep from saying “Oh, my God,” according to Herche. The agents grilled Herche, trying to figure out who could have left behind such a document. They also wanted to know if he had made photocopies. The two agents returned every day during the G20 to eat lunch in Herche’s restaurant.

Herche, for his part, received the FBI Medal of Honor.

In an interview with Al Arabiya TV Herche, 26 said he comes from the village of Gibaa near Niha al Chouf, east of the capital Beirut. Even though he graduated from nice University he prefers to work at the restaurant. He and his brother Hassan take turns in managing the restaurant.

He told al Arabiyah that he going to write a letter to president Obama to tell him that the Lebanese are peace-loving people. He promised to let al Arabiya know as soon as he hears fro the US president