Egypt recalls its ambassador to Syria 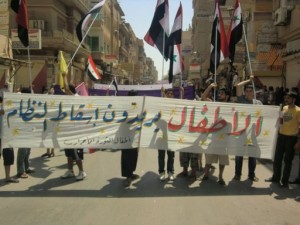 Egypt recalled its ambassador to Damascus on Sunday, state media reported, the latest move by an Arab state to isolate President Bashar al-Assad and pressure him to halt a violent crackdown on protesters.

The Foreign Ministry also said the Syrian government had decided to recall its ambassador to Cairo. There was no immediate official Syrian comment.

Gulf states, leading the drive against Assad, have already withdrawn their ambassadors from Damascus and expelled Syrian envoys in their capitals. Other Arabs have made similar moves.

“The decision is a message that Egypt is unsatisfied with the situation in Syria as it is,” Foreign Ministry spokesman Amr Rushdy said, the official state news agency reported. He added that Egypt’s envoy would remain in Cairo until further notice.

“Egypt subsequently learned that the Syrian government had decided to recall its ambassador from Cairo. We have no choice but to respect this Syrian decision,” he said.

He said Egypt was responding “step-by-step” to the crisis and said Cairo had been working in public and behind the scenes to support an Arab peace initiative.

The Arab plan calls for a halt to violence and for Assad to hand power to a deputy in order to start talks with the opposition, although the opposition has said it will not hold negotiations with Assad’s government.